Celestyal’s Three Continents itinerary is an epic journey by sea to the iconic cultural highlights of Europe, Asia and Africa in just seven nights. Your exploration of Cairo, the crossroads of the Middle East, begins at Port Said on Egypt’s Mediterranean coast. Port Said grew up to serve the Suez Canal, itself considered a divider between Africa and Asia, and while its foundation in 1859 makes it a relative newcomer in this part of the world, the port retains many old houses with original balconies and exudes a worldly seaside atmosphere. By contrast, Cairo is at once ancient and crackling with contemporary Arabian energy, a mystery to most visitors but to Egyptians, simply Umm Ad Dunya—the Mother of the World. With around 22 million inhabitants today, the sprawling Egyptian capital was founded as a royal city of the Fatimid Caliphate in 969 AD and today is a magnificent medley of historic mosques and modern skyscrapers, enchanting bazaars and car horns blaring around a mad tangle of streets, including avenues still redolent of 19th-century Belle Epoque elegance and well-preserved medieval byways flanked by Fatimid and Mamlgb monuments. Then of course there are the Pharaonic monuments, chief among which are the Pyramids at Giza that was built some 4,500 years ago. Just west of Cairo proper, the largest of the complex of pyramids, is the iconic Great Pyramid of Giza, and the oldest of the Seven Wonders of the Ancient World. But with a rich cultural tapestry and breathtakingly modern verve, the metropolis of Cairo itself is something of a wonder, too.

See All Cruises To Cairo 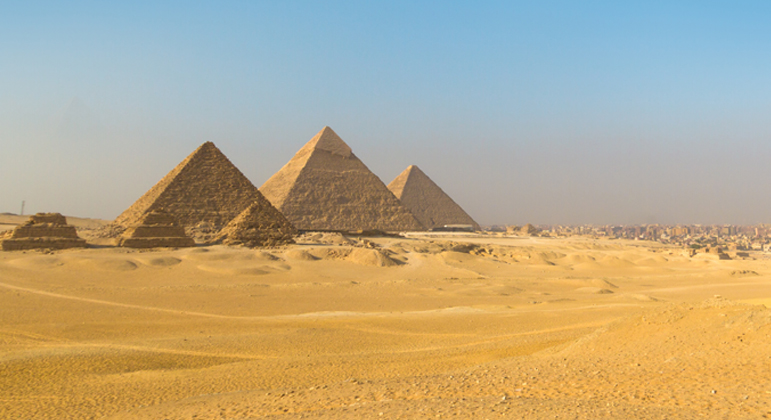 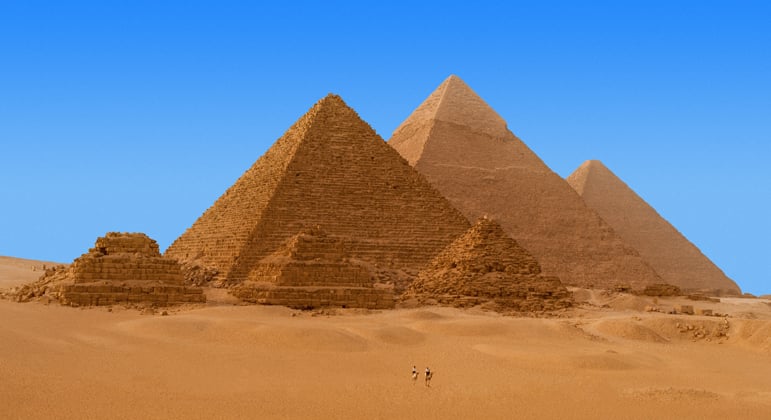 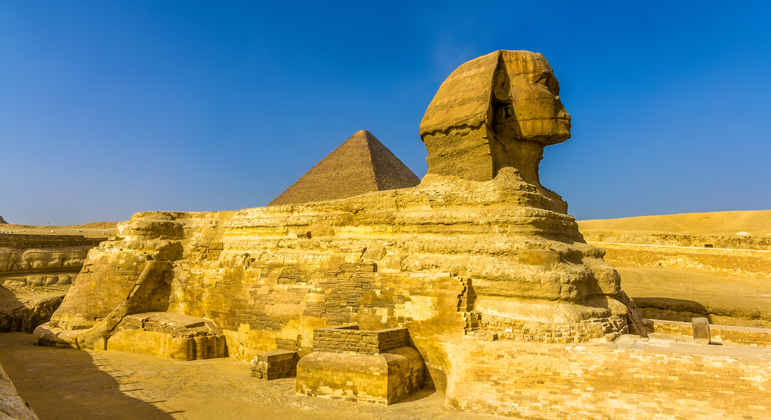 Pyramids of Giza and Great Sphinx

The spectacular and instantly recognizable Pyramids at Giza are emblematic of Egypt. These elaborate burial complexes were built with extraordinary geometric precision some 4,500 years ago, probably by teams of thousands of Egyptian farmers. It is thought they had time for these laborers during the flood season when the waters of the Nile submerged their fields, and it would have been easier to move stones to the building site. The three largest and most famous pyramids are the Great Pyramid of Khufu (rising 481 feet and also referred to as the Great Pyramid of Giza or Cheops), the Pyramid of Khafre and the Pyramid of Menkaure. The world’s oldest and most iconic monumental sculpture, the Great Sphinx, is situated slightly further down the valley on the west bank of the Nile. Likely constructed during the reign of Pharaoh Khafre between 2558-2532 BC during the Old Kingdom period and measuring 240 feet from paw to tail, the mythical figure has the body of a lion and head of man, its gaze fixed firmly on the vast desert horizon and mysterious as ever. The Grand Egyptian Museum will be the world’s biggest archaeological museum when it opens at Giza (the opening is scheduled for 2021). 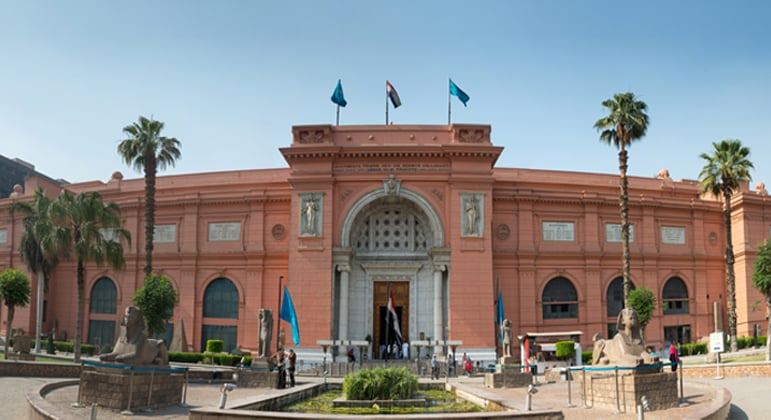 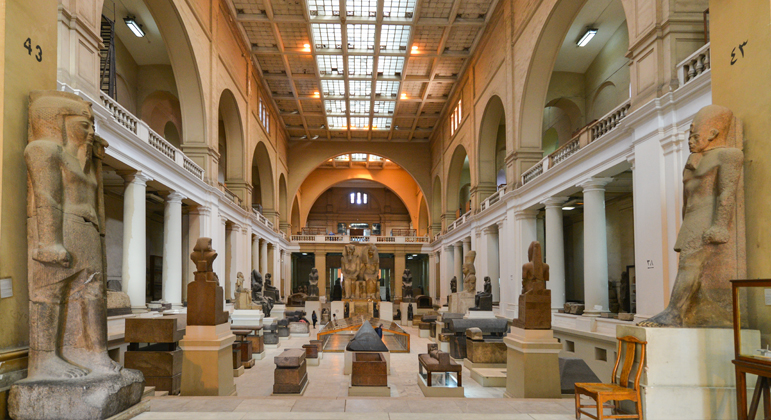 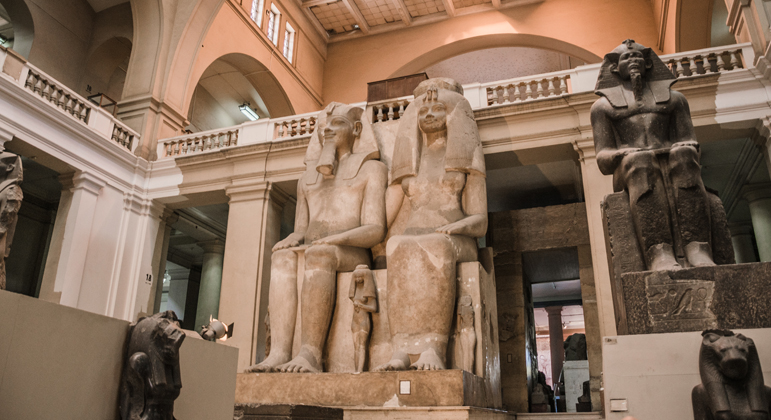 The Museum of Egyptian Antiquities in the heart of Cairo is one of the world’s preeminent archaeological museums and houses some 120,000 artifacts inside its fancifully domed historic building on the northern side of Tahrir Square. It was designed by a French architect and constructed by an Italian company in 1902 and contains the largest collection of Pharaonic antiquities in the world. The magnificent treasures of Tutankhamun and other great pharaohs are here, in addition to mummies, ancient jewelry, grave goods, eating bowls, and even ancient Egyptian toys. On the ground floor, there are exhibits of papyrus and coins while the atrium is the domain of large sarcophagi and statues from the time of the New Kingdom (1550 BC-1069 BC). The upper floor features displays of antiquities from the tombs of prominent Pharaohs as well as artifacts from the Valley of the Kings, including intact material from the tombs of Tutankhamun and Pasebakhaenniut. The mummies of Pharaohs and New Kingdom royal family members are on display in two dedicated rooms on the upper floor. 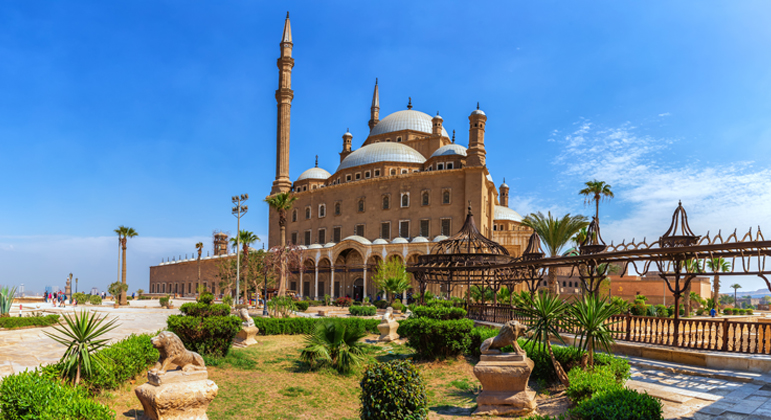 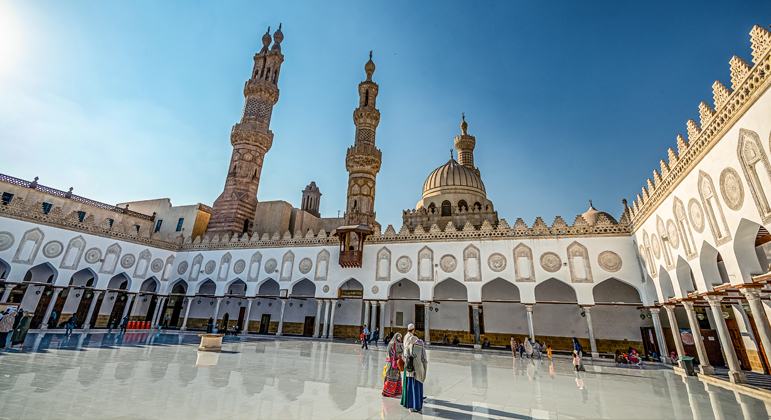 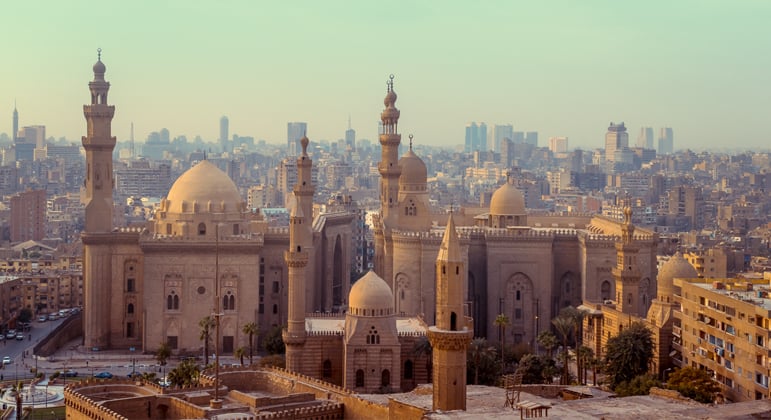 Cairo’s Great Mosque of Muhammed Ali Pasha, is located within the Citadel of Cairo, a fortress compound from the medieval Islamic period. The mosque itself, also called the Alabaster Mosque, was completed in 1848. No less iconic is the older Al Azhar Mosque, founded in 970 AD and a mix of architectural styles with ancient Egyptian, Greek, Roman, and even Coptic Christian influences. There have also been various Mamlgb and Ottoman enlargements to the mosque. The university here once drew students from all over the Islamic world as well as Europe, and the sheik of the Al Azhar mosque is still the highest religious authority for Egypt’s Muslims. The oldest section is the central courtyard while a trio of minarets that stand south to north is from the 14th, 15th, and 16th centuries respectively—the “newest” one features a beautiful double finial added by Sultan Al Ghouri (whose own mosque and mausoleum are nearby). Past the main entrance and through a doorway on the left side is the location of a tomb chamber with a stunning mihrab, or niche that is oriented toward Mecca. Another monumental structure is the Mosque-Madrassa of Sultan Hassan, rising like an enchanted fortress from the crowded cityscape. It was completed in 1363 during the time of the Mamlgb Sultanate in Egypt. 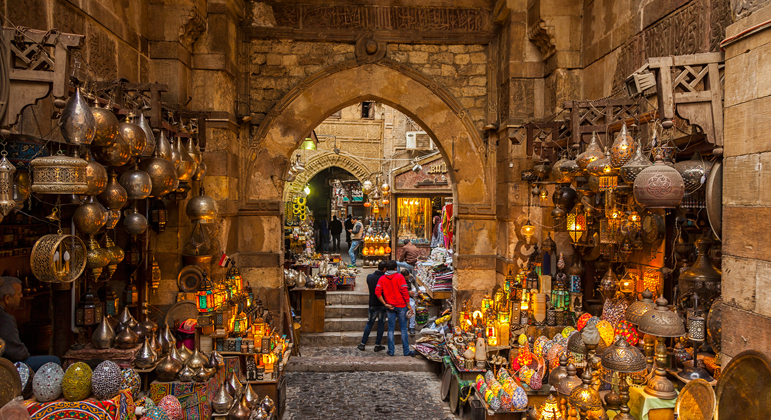 A walk-through Cairo’s exotic Khan el-Khalili bazaar is more than just a shopping trip— it’s a journey back in time. This vast collection of crafts workshops and stores in the Middle Eastern sogb par excellence and the place where Cairenes have been scooping up everything from semiprecious stones to spices, handcrafted soaps and much more since the 14th century! There is a wide array of merchants and artisans selling unique souvenirs, decorative lanterns and so much else in this atmospheric bazaar, while there are separate sections for the coppersmiths, spice merchants and gold sellers. In general, the individual merchant stalls stay open from 9 AM until after sunset, except for Friday mornings and Sunday. And yes, you can definitely try to bargain with vendors in the bazaar!

The Sharia Al Muizz quarter, named for the Fatimid conqueror of Cairo, is just north of the gold merchant area of Khan el-Khalili and its most beautiful section is the recently renovated Bayn al-Qasrayn, a plaza situated between a pair of former Mamlgb palace complexes. Soak up the enchanting atmosphere of the ancient minarets, domes, and elaborate striped-stone building facades. During the day it’s a pedestrian zone, so you can browse the shishas (water pipes) and copper wares on sale in relative tranquility or simply marvel at the remarkable ensemble of medieval Egyptian architecture.