The horseshoe-shaped Greek island of Milos, which is the southernmost island of the western Cyclades, is a real unsung pearl of the Aegean. Volcanic by origin, the island has a stunning array of landscapes and beaches with backdrops of multicolored cliffs and water that dazzles with crystalline greens and blues. Its captivating geological formations are the result of undersea eruptions that started perhaps up to three million years ago, which piled up layers of lava that reacted to the island’s geothermal waters and created a kaleidoscope of rock formations and sea stacks like the rock of Arkouda that jut up spectacularly from the sea floor in many places along the island’s 126 kilometers of coastline. Look carefully and you can sometimes even see steam rising from fumaroles on both land and sea, and there are abundant mineral springs on the island too. Milos does not have a caldera like nearby Santorini, but it is full of marvels forged by nature, making it a sensory feast unlike any other.

See All Cruises To Milos 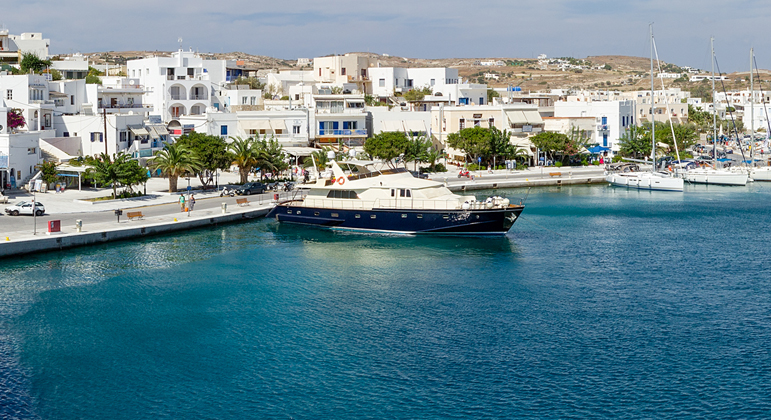 The volcanic origins of Milos endowed it with great mineral wealth known even in antiquity when the island was known as a source of sulfur as well as the clay used to make amphoras. Obsidian, too: the ruins of a Minoan trading post where the volcanic glass was traded can be found at Filakopi on the island. Mining activity has continued even into modern times. Historians know Milos as the island that fought on the side of Athens during the Persian wars but then in the Peloponnesian War between Athens and Sparta opted for neutrality—which didn’t sit too well with the Athenians who went on to besiege the island. On a more artistic note, Milos is the island where the famous statue of Venus de Milos (which is now in the Louvre museum in Paris) was discovered. Fast forward through the eras of successive Macedonian, Venetian and Turkish rule to the Greek War of Independence of 1821, for which Milos provided both materials and men. Today, exploring the seashore, sea caves and unspoiled landscapes of Milos is the highlight for most visitors to the island. As for settlements on the island, they are not large. There’s the small but lively port of Adamas, which sits astride one of the largest natural bays in the Mediterranean. This is the perfect spot for a laidback lunch or iced coffee facing the water. North of Adamas is hilltop Plaka, with the fishing village of Pollonia a bit further afield on the north coast. 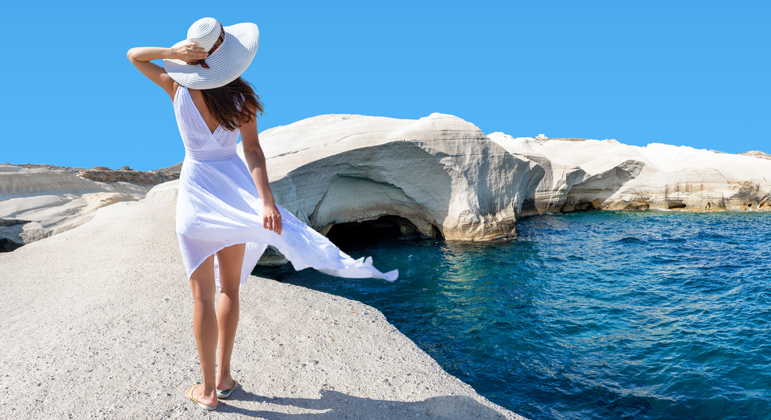 You may wish to discover one or more of the 70 beaches on Milos. Each one is unique, from crystalline waters to beaches with multicolored sand where the tiny pebbles are said to even glow in the dark. One of the most beguiling spots is at Sarakiniko, an alabaster-white seaside moonscape where the interplay of the sun on velvety-smooth whitewashed rocks against the electric blue sea makes for an unforgettable sight. This stunning expanse and onetime hideout of Saracen pirates (after whom it’s named) is a mix of limestone and diatomite, a soft white sedimentary rock that was formed from volcanic ash. While it’s possible to swim in some spots at Sarakiniko, you have to be mindful of the cliffs and you can perhaps best appreciate the natural beauty of the landscape from above the water. Another scenic locale for a dip on the north coast is Papafrangas, a wedge of sandy beach about three kilometers before Pollonia. It extends to a narrow sea channel between a pair of white volcanic cliffs. 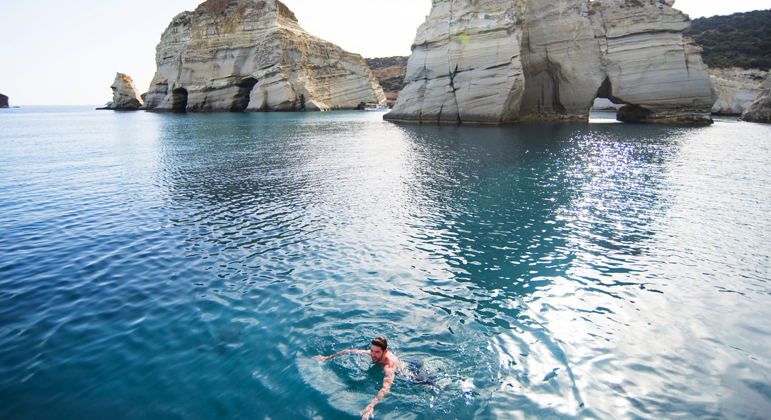 On the southern coast, Firiplaka is a wonderful sandy beach renowned for its colorful sea cliffs and emerald water. Further south from Firiplaka you’ll find secluded Tsigrado beach which is like something straight out of a pirate movie: this beach you can only access by boat or by ladder! Speaking of pirates, the island’s most iconic spot for a dip is one without a lot of sand but where indeed pirates are said to have sought refuge in the days of yore—this is Kleftiko, a cluster of coves ringed by dramatic white cliffs and sea stacks. Dolphins, turtles and seals are regular guests in the electric blue waters here. Slightly north of Kleftiko but still on the south side of the island is Sykia, a fantastic sea cave of which the roof has collapsed but that makes for some spectacular swimming but like Kleftiko, you have to arrive there via boat excursion. 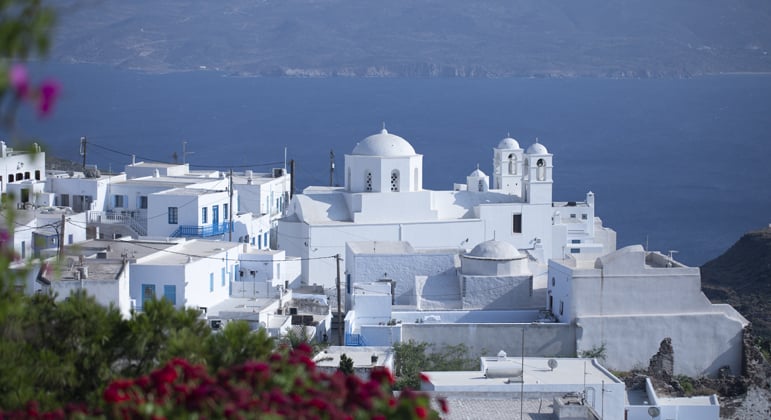 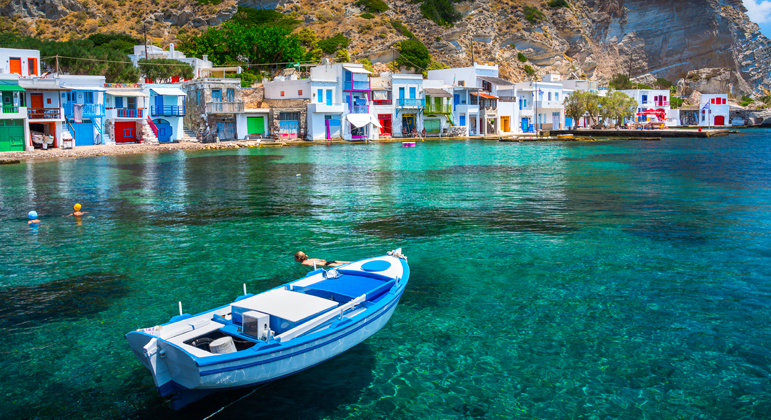 Given Milos’s strategic location in the Cycladic islands and rich history, it has plenty of other points of interest, such as the Early Christian catacombs at Tripiti. There is a total of 126 vaulted graves from the second to fifth centuries AD carved into soft volcanic tuff and linked by a series of tunnels. Incidentally, this is near a small cave near the ruins of an ancient theater wherein 1820 the Venus de Milo was discovered. You can visit the Museum of Folklore and Museum of Archaeology in serene Plaka, the island capital set on a small plateau at the foot of the ruins of a Venetian kastro, or castle. Plaka is a quiet vision of gleaming white houses, flower-filled balconies and the pretty church of Panayia Thalassitra, the patron saint of sailors. Down at the shore below Plaka you’ll find the tiny fisherman’s hamlet of Klima with its iconic syrmata houses. These are two-story houses carved right into the rock so that the ground floors do double duty as boathouses and the doors and balconies are painted in all manner of bright colors. It makes for yet another unexpected and picturesque sight on Milos, a true stunner of an island.