The fifth-largest island in the Mediterranean and the largest one in Greece, mythic Crete is much more than just another Greek island—its scenery and cuisine are second to none and its vaunted reputation as a repository of Minoan ruins at sites like Knossos make it a cultural contender without peer. The sheer size of the island, which anchors the southern edge of the Aegean Sea, makes it a bit of a juggernaut to see in one fell swoop but even a short visit is enough to take in some highlights. From east to west, the distance is approximately 160 miles and while distances north to south are much less, this is rugged, often mountainous terrain. Zeus, the most powerful of the ancient Greek gods, was according to legend born in a mountain cave near the center of the island. Unspoiled Mediterranean landscapes abound and are embroidered with charming mountain villages and inviting coastal hamlets, all colored by a rich cultural heritage: Crete was the starting point of European civilization in ancient times and also flourished under four centuries of Venetian rule. Here on the island of artist El Greco and Nikos Kazantzakis, author of Zorba the Greek, there’s inspiration at every turn.

See All Cruises To Crete 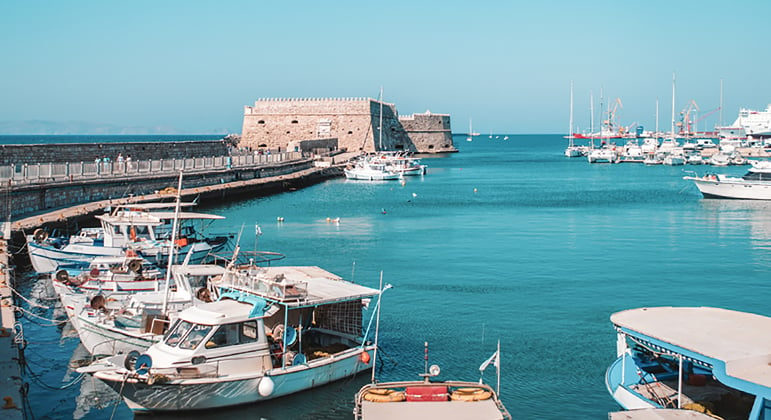 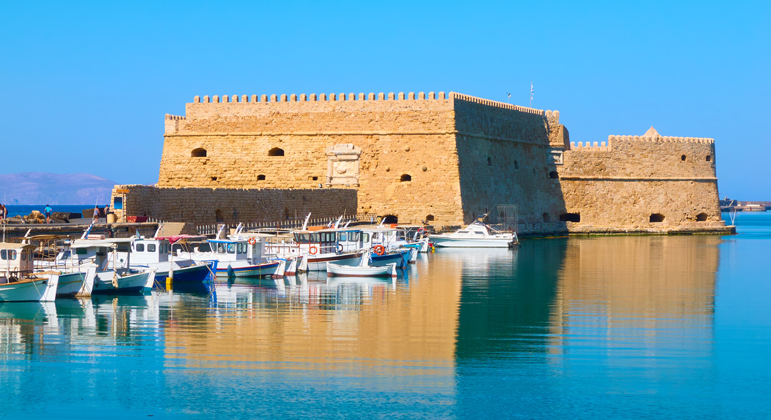 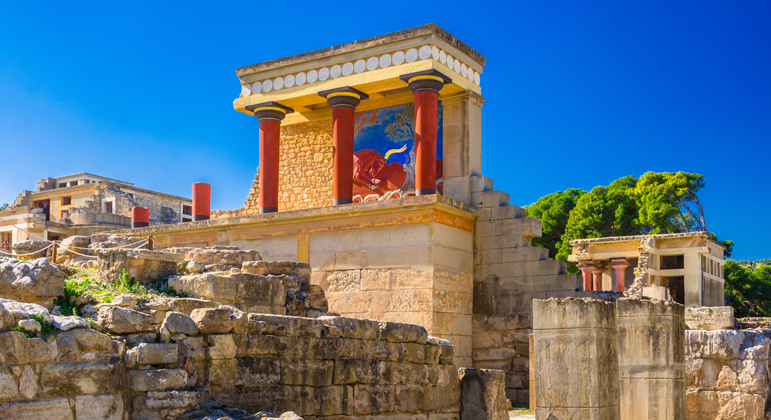 The larger cities of Crete, which are the capital, Heraklion, Rethymno and Chania, are all on the north coast. Heraklion, situated along the midpoint of the island’s north coast, takes its name from Herakles—better known as Hercules. Heraklion was the port of the Minoan palace city of Knossos, the site of the Kastro (Castle) and Megalo Kastro (Grand Castle) in Byzantine times, the Arab fortress known as Chandakas, the flourishing Candia under the Republic of Venice. The Venetians built the ramparts which still encircle the city center and the Rocca al Mare fortress, now called Koules, at Heraklion’s inner harbor. Opposite the port, you can still see a series of mighty stone arches, which were the Venetian shipyards. The Republic of Venice invested a lot of time and treasure in defending Heraklion, which finally fell to the Turks, who renamed it Kandiye, in 1669.

The heart of Heraklion is Morosini fountain at Liontaria or Lion’s Square but the star cultural attraction of the city, and indeed of all of Crete, is the Heraklion Archaeological Museum. It is home to the largest collection of artifacts from the Minoan civilization, the earliest in Europe. You will be amazed at what the islanders created here from around 2700 BC up to around 1450 BC. Ornate Minoan jewelry including the golden bee pendant, the Phaistos Disc and exquisite figurine of the bull leaper—which item will stir your imagination the most? The Minoan palace ruins of Knossos are found just outside the city center at a colossal Bronze Age site that encompasses hundreds of interconnected walls and rooms including what celebrated archaeologist Sir Arthur Evans identified as the megaron or Throne Room. With a little imagination, you can picture legendary King Minos holding court over the labyrinth that housed his son, the mythical half-man, half-bull known as the Minotaur, here. Decorated pithoi storage jars and multicolored frescoes abound on the site too, while many of the original frescoes such as that of the “Prince of Lilies” and famous bull leaper are now housed in the Heraklion Archaeological Museum. Another palatial, open-air Minoan archaeological site is at Phaistos, south of Heraklion. 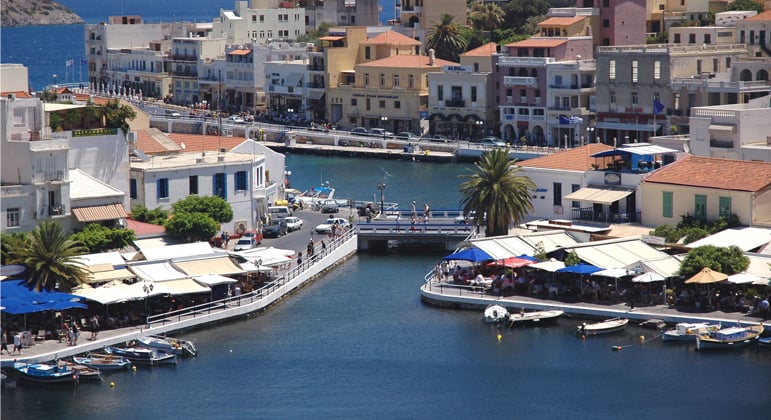 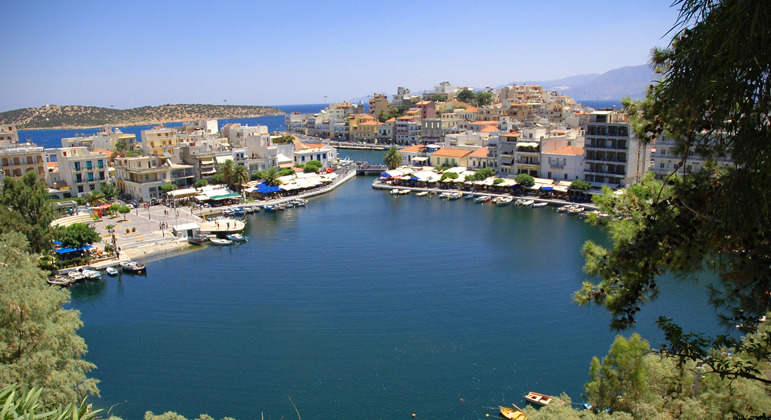 Along the spectacular Cretan coast east of Heraklion, you’ll find the energetic resort towns of Hersonissos and Malia and also the capital of the Lassithi region, Agios Nikolaos. The charming resort town, whose name (Saint Nicholas, in English) refers to Greece’s patron saint of sailors, fronts the wide blue Bay of Mirabello. The town’s landmark round Lake Voulismeni—where the goddess Athena is said to have bathed—connects to the sea. As you walk along the picturesque waterfront, don’t miss the modern Minotaur Mural—Agios Nikolaos is full of little discoveries! On a more historical note, north of town in the Gulf of Elounda is the isle of Spinalonga, with many of its Venetian fortifications still intact. The gulf itself played an important role in the Cretan revolt against the Turks (1866-1869). 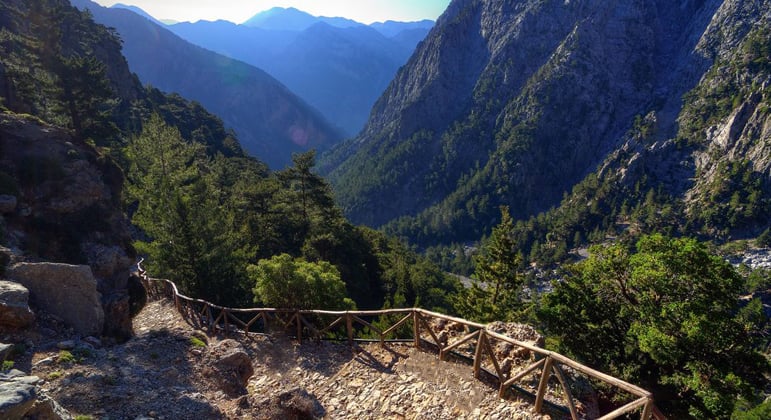 While Crete is best-known as a sunny escape, its rugged and deeply chiseled coastline also makes it a paradise for hikers. The island is more about mountains and gorges than wide-open spaces and plateaus (though there are a few of those) and the most spectacular ravine is the Samaria Gorge, nestled in the White Mountains on the south coast of Crete (Region of Chania) and part of a protected biosphere. The popularity of the gorge’s 10-mile-long walking path does nothing to diminish the setting’s remote and rugged appeal; the trail starts at an elevation of more than 4,000 feet and culminates at the Libyan Sea. Due to its southern position, Crete’s beach season is one of the longest in Europe. On the south coast as well as the north, the sea is warm enough for swimming well through October. 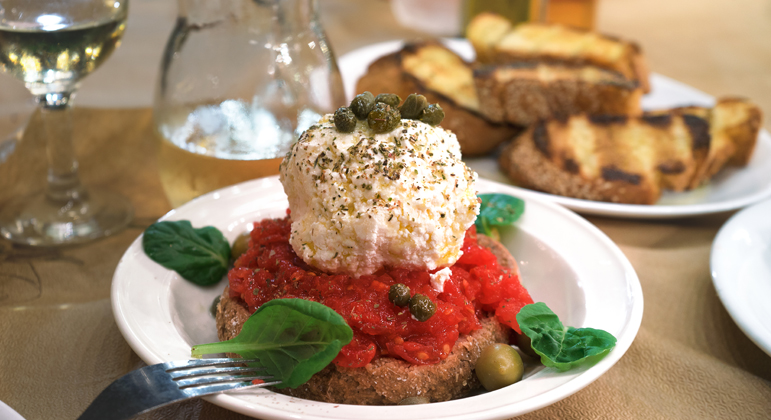 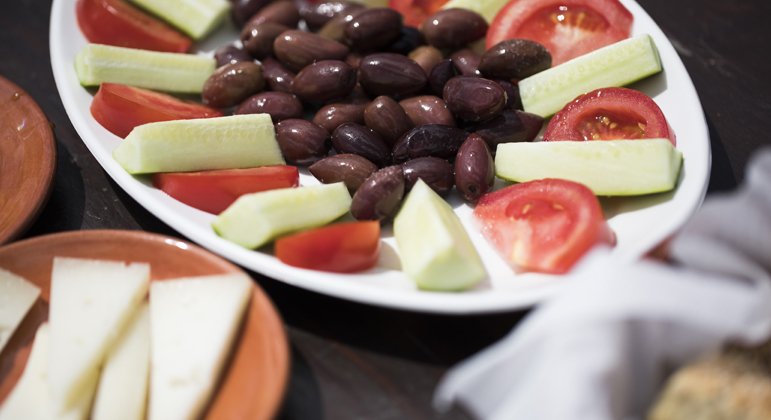 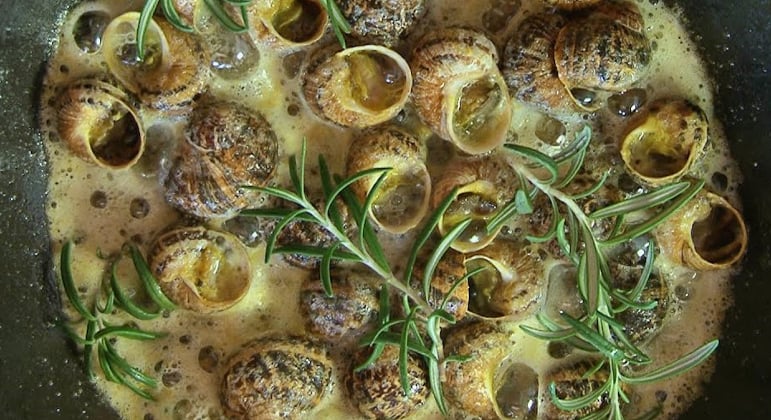 With some 35 million olive trees and wine presses dating as far back as 1500 BC, it’s no wonder that the gastronomy of Crete is so special and tasty. Crete produces a third of all the olive oil in Greece, and 90 percent of it is extra virgin. The island’s unique biodiversity includes myriad native wild herbs and greens.

According to leading Greek nutritionist Stefanos Pertsemlides, “While the Cretan diet does not differentiate much from the Greek/Mediterranean diet, what is unusual is the very wide variety of ingredients that Crete as—this is quite unique, especially for an island.” In fact, the term ‘Mediterranean diet’ is based on the Cretan diet of the early 1950s, he adds, “when a very important study revealed the Cretan diet to be a protective factor against cancer and cardiovascular diseases.” Whether you feast on herb-suffused Cretan pork sausage, chicken souvlaki marinated in yogurt and garlic, or dakos, a kind of bread rusk with chopped tomatoes, drizzled with soft cheese and sprinkled with olive oil, Cretan cooking and its myriad traditional meze, or small appetizer plates, will leave you hungry for more. Excellent restaurants include Ferryman in Elounda; Peskesi in Heraklion and Portes; and Ta Chalkina in Chania. But even the humblest taverna in Crete turns out tempting dishes you’ll probably want to text home about.