Volos Is All About Epic Beauty and Nature

Multifaceted Volos occupies a vaunted place in Greek mythology as the legendary home of Jason and the Argonauts and also has one of the most spectacular natural settings in Greece. This bright and sunny port city is the capital of the mineral-rich Magnesia region of Thessaly, located about midway between Athens and Thessaloniki on the Greek mainland coast. Volos can boast a truly marvelous location on the Pagastikos Gulf, opposite the Pelion peninsula that juts into the Aegean Sea. The lush green peninsula, named for the father of Achilles, King Peleus, was the mythical home of the half-human, half-horse centaurs and on its highest summit, Mount Pelion, was where the fabled ancient beauty contest between the goddesses Hera, Aphrodite and Athena took place—leading to the Trojan War. No wonder a region so green and gorgeous is steeped in legend—it’s also where Jason set out on ships with the Argonaut sailors to find the Golden Fleece. Volos is a veritable springboard to the foothills of Mt Pelion, with its rustic villages sprinkled amid forested hillsides, and is also the gateway to the ethereal cliff-top monasteries of Meteora.

Volos itself offers everything you need for an exciting or relaxing day in port. Step off your Volos cruise, and you’re greeted by a thriving university city whose energetic pace will whisk you up into its whirlwind of activity, along the edge of the beautiful natural harbor and in the tsipouradika—traditional tavernas—and set you on course to uncover some real architectural gems, both ancient and neoclassical. Wander around and you’ll find grand urban mansions sitting beside nods to the city’s long-lasting industrial heritage. And following the hum of activity will see you in Volos’ favorite local hangout Kontaratou, which is brimming with countless cafes and eateries of all kinds.

See All Cruises To Volos 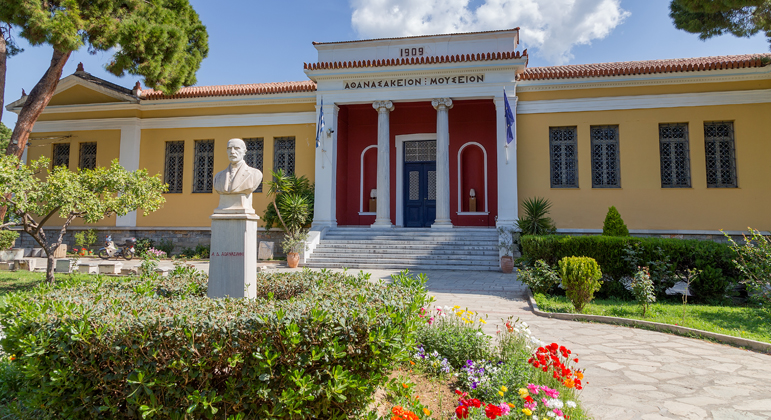 The Athanasiko Archaeological Museum of Volos is a must-see attraction that was built in 1909 and is set in a beautiful rose garden. Many of the objects on display were discovered in the early 20th century or during modern excavations in Thessaly, with some of the earliest finds from the archaeological sites of Sesklo and Dimini (the latter is the home of ancient Iolkos, from where Jason and the Argonauts set out). There are incredible collections from the Neolithic era to the Roman times, including coins, jewelry, gold artifacts, tools, weapons, rare grave stelae and ancient tombs, and figurines. On a more modern note, the Volos Museum of the City, located in a former tobacco warehouse in the city’s Palaia district, features evocative photos that trace the history of Volos from the 1800s onward with a fascinating section on the 1923 population exchange between Greece and Turkey. Don’t miss the great museum cafe. 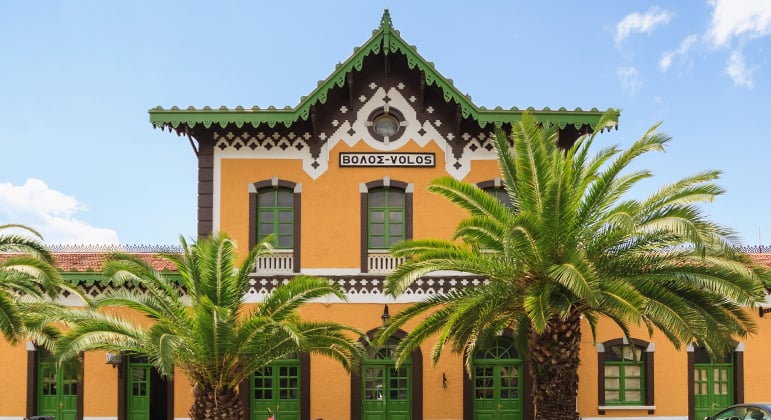 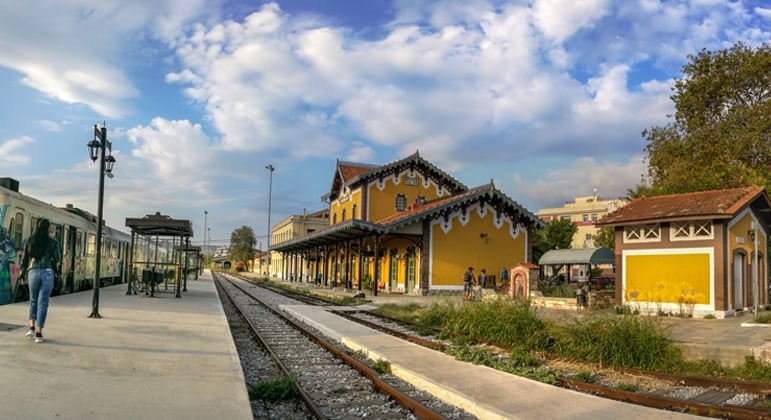 The Historic Railway Station of Volos, designed by Italian engineer Evaristo De Chirico and completed in 1884, is well worth a visit for its elaborate neoclassical architecture and a stunning roof with wooden decoration. It was one of the few buildings left intact after a devastating earthquake that struck Volos in 1955. The first floor of the building is where you’ll find the Railway Museum of Thessaly, which houses numerous exhibits, including old photos, telegraphs, uniforms, engine parts and ticket machines that showcase the station’s history. If this whets your appetite for a train ride, consider an excursion on the Pelion train, a throwback to 1896 when this narrow-gauge railway entered into service from Volos. The four-wagon, steam-powered train now traces alone mountainous track between Ano Lechonia and Milies, with a short stop at the village of Ano Gatzea. 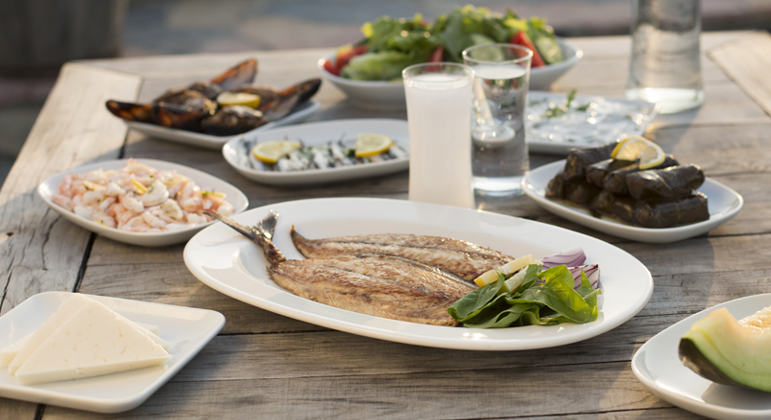 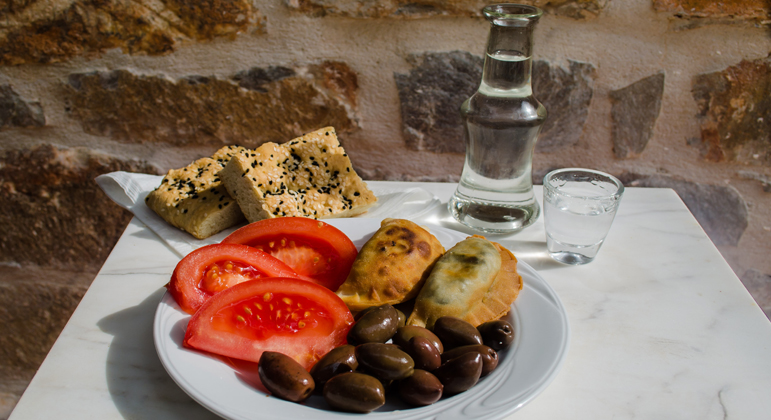 Argonauts Avenue is a pretty promenade that runs along with the port and leads to a replica of Jason and the Argonaut’s ancient Argo ship. As you follow the paved walkway around the seafront, you’ll spot lots of yachts and colorful fishing boats and you’ll come across an array of tsipouradika tavernas for which Volos is renowned. These casual eateries serve up some of the city’s most delicious food accompanied by a tsipouro, or pomace brandy. With just under 600 tsipouradika in Volos, they’re a gastronomic destination in their own right. You just order the tsipouro and when it’s served it will come accompanied by two or three tasty mezedes, or meze (small plates) consisting of fish and fried seafood mezedes, meat dishes, olives, cheese, pickled vegetables, smoked red pepper, stuffed vine leaves and more. If the plates seem small don’t worry because with each little bottle of tsipouro will come more meze! For a heartier option, try the spentzofáï, a local stew made with sliced pork sausage, shallots and green and red peppers. 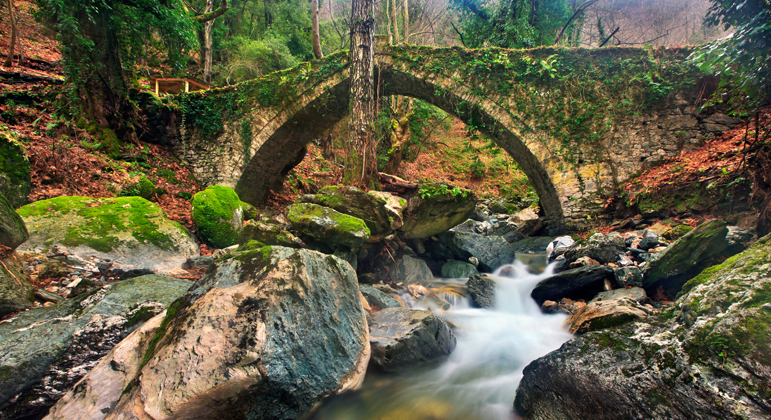 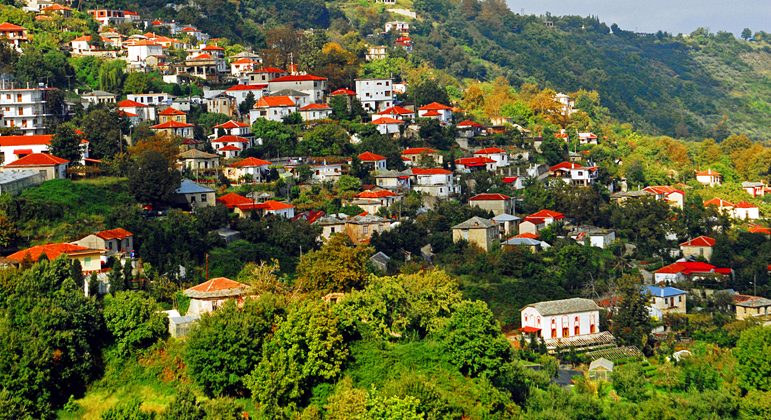 Since Volos is the closest big city to Mount Pelion, you can discover the natural paradise of Pelion with a journey into the hills. Considered by many to be the most stunning region of Greece, Pelion feels like a mythical wonderland with wild vegetation, olive groves, plane trees, hidden valleys, waterfalls, dense forests and gorgeous beaches, too. The mountain villages are the real gems of Pelion. Makrinitsa is known as the ‘balcony of Mount Pelion’ because it’s located 700m above sea level and overlooks the entire gulf of Volos, and then there’s Tsangarada village with its narrow cobblestone streets, 1000-year-old plane tree and spectacular views of the Aegean Sea. If you prefer relaxing beach days, head to the eastern side of the peninsula for the most exotic beaches, including Fakistra, Horefto, Papa Nero Agios Ioannis and Mylopotas. And if you’re a fan of the Mamma Mia movie, go to the coast of Damouchari, the location where the ‘Dancing Queen’ scene was filmed. 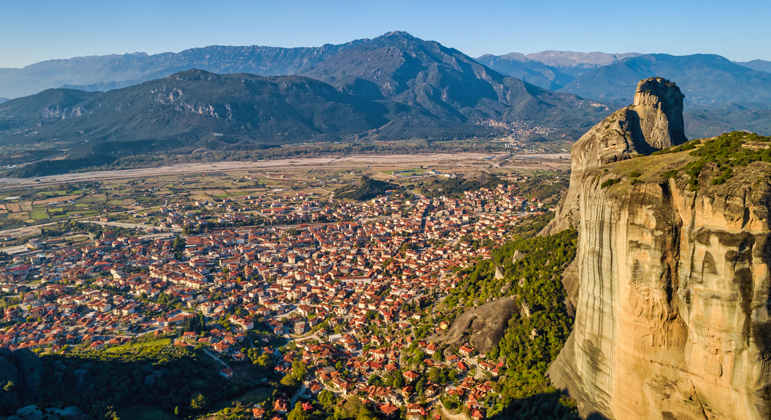 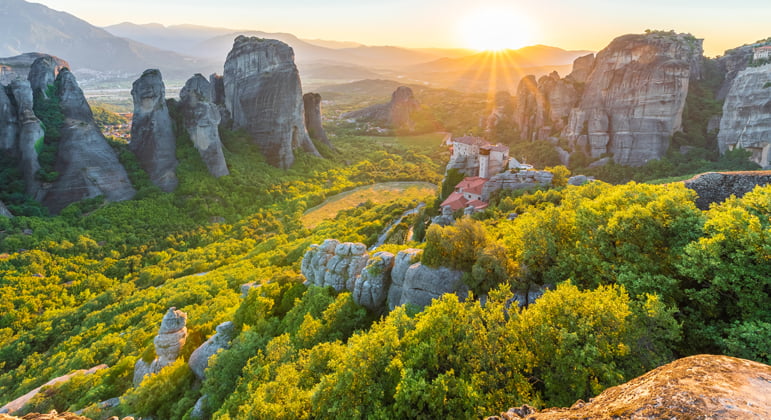 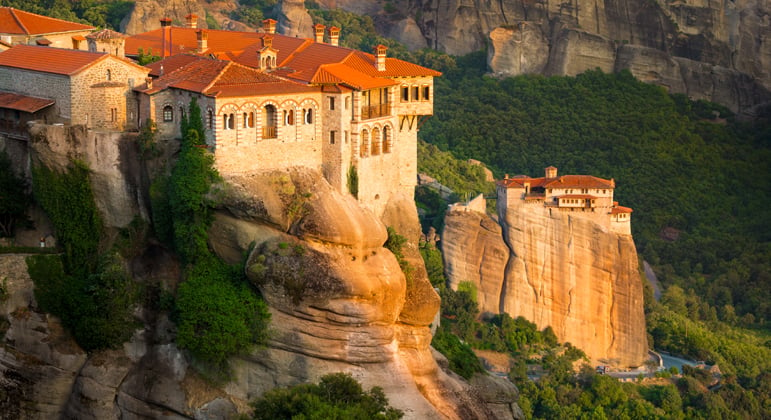 Otherworldly, enchanting, simply stunning: the extraordinary rock formations and cliff-top monasteries of Meteroa invite superlatives. Located in the heart of western Thessaly, the UNESCO-listed monastery complex of Meteora—which means ‘suspended in air’— is one of the most popular day trips from Volos. Film buffs might recognize the unique landscape of the area and the huge protruding rocks reaching upwards of 400 meters in height from the James Bond movie For Your Eyes Only. These stone giants are the unlikely foundations for some of the largest and most precipitously built Eastern Orthodox monasteries, some dating back to the late 11th century.

Seeing really is believing when it comes to Meteora, where after a drive through the countryside from Volos, your eyes will be drawn to the sky as these giant rocks appear out of nowhere. At their feet, you’ll find the sleepy village of Kastraki, but the spiritual energy is literally on a higher level here. Out of 30 historical monasteries, six are still in use and open to the public, including the monasteries of Rousanou (today a nunnery), Varlaam which was built in 1541 and is today home to seven monks, Holy Trinity, St Stephen (also now a nunnery), St Nicholas Anapausas with just one monk in residence and the mid-14th century Great Meteoron which is the largest. Their exquisite frescoes are a sight to behold as are the panoramic views from the top. The spectacular monasteries can be reached by staircases cut into the rocks—and trust us when we say the breathtaking views from the top are well worth the climb!