A cruise holiday to Cyprus brings you to the crossroads between east and west, an island that has been the stepping stone of practically every influential civilization in the region. From the Neolithic period to the adventurous Phoenicians and the genius of the ancient Greeks, Cyprus is more complicated than first meets the eye but is also endlessly fascinating and delightful to discover.

The third-largest island in the eastern Mediterranean, the Republic of Cyprus is an independent country mainly composed of Greek Cypriots in the south and Turkish Cypriots in the north – both communities their rivals occupy their respective territories illegally.

But the island’s deep ancient roots make it a mosaic of cultures. Its dramatic landscapes, sun-kissed coast and cool Troodos Mountains at the core, Cyprus is studded with hills of vineyards, castles and monasteries that make even the shortest foray something to remember. Whilst much of its historical prominence lies in a state of beautiful ruin, others are still in active use today.

A Contrast of Culture

It only takes a few hours to see how the modern and very ancient past easily commingle on this island nation. Cyprus may be part of the European Union, but a strong Middle Eastern influence harks off the coastal cities of Israel and Lebanon which lay closer to Cypriot shores than Athens.

Consequently, Cyprus is a blend of regions and religions, and thanks to its fantastic beaches and quaint historic old town, draws travelers from around the world today. Prior to the Turkish invasion in 1974, which ultimately divided the country, the casino-lined golden mile of Cyprus was the Monte Carlo of the eastern Med.

Its copper-rich mines were crucial to the rise of Cyprus, and together with the captivating scenery persuaded Richard the Lionheart to banish the Byzantine rulers and marry his beautiful bride, Berengaria, in Limassol Castle.

See All Cruises To Cyprus

The Crossroads Between East and West 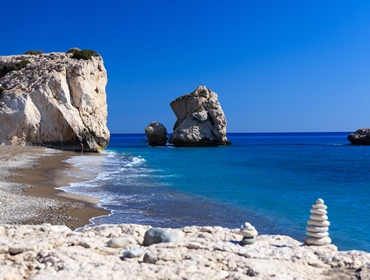 According to Greek legend, Cyprus is said to be the heaven upon which Aphrodite, the goddess of love and beauty, was washed ashore in the foam of a wave at Petra Tou Romiou, an impressive rock formation on the coast of Cyprus between Limassol and Pafos. 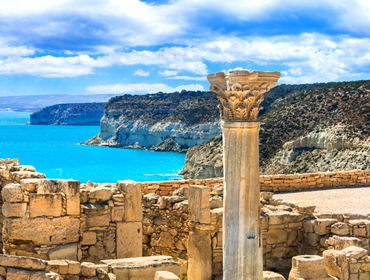 The cosmopolitan port city of Limassol is a striking chain of new high-rises towering over the charming colonial walls and quaint churches. Stroll along the seaside promenade for a panoramic view or join our expert guide for an insightful tour around the UNESCO protected city of Pafos.

Made from sun-dried grapes, the island's sweet red dessert wine is the oldest wine in the world that is still manufactured. Originally referenced by Greek poets in 800 BC, it was christened commandaria by the Knights Templar stationed here during the Crusades and is still drank today.
See All Cruises To Cyprus

Cyprus cruise Holidays with Celestyal Cruises take you to destinations other Mediterranean cruises cannot reach. Join us to experience breathtaking scenery, authentic traditions and genuine cuisine. Take a look at all the other vibrant Greek islands and iconic destinations we visit below.
Cyprus Cruises Mediterranean Cruises

Iconic Monuments in the Med

Cyprus’ tumultuous history has left an indelible mark on the island’s architecture and culture. The island is the only country in the world separated by a wall which divides the Turkish Cypriot community in the north from the Greek Cypriots in the south. You will also note the Cypriots drive on the right-hand side of the road, a custom left by the British that brought the island in the fold of its far-reaching Empire between 1878 and 1960.

While commandaria is principally a dessert wine, there are many sumptuous wines throughout Cyprus and the Greek islands. It’s always fun to mix with the locals in the charming tavernas and sample the local flavors. Just remember, cheers in Greece is yamas!