WELCOME TO THE HOLY LAND

Nestled between the Mediterranean Sea and the slopes of sacred Mount Carmel is Israel’s third-largest city, Haifa, a multicultural melting pot of shrines, promenades, gardens and biblical sites. A place for adventures itself, Haifa is also popular as a gateway to Jerusalem, Bethlehem, Nazareth and other historic cities. For faith travellers and pilgrims, as well as everyday explorers, a visit to this part of the world can be deeply moving and never short of wonders. The city of Haifa is made up of a kaleidoscope of neighbourhoods, from its bustling Arab-Christian quarter to its sophisticated German colony to its vibrant, boho Masada Street, each adding to the verve of this diverse destination. The freshly renewed downtown area is even being hailed as Israel’s most innovative and interesting hipster hangout. Explore Haifa’s German colony for German Templer architecture with its honey-coloured stone and ornate calligraphic decoration, and to visit the Bahai Gardens, a lush sanctuary of water features, palm trees and the golden-domed Shrine of the Bab. Explore the Cave of Elijah at the slopes of Mount Carmel and the Carmelite monastery. Then take to Masada Street and witness modern street art, eclectic bars and art cafes, and live philosophical debates. Or to take in the region’s spiritual history, which is second to none, opt to visit the traditional Druze village of Isfiya with its tomb of Abu Abdallah, or the Carmelite monastery at the Biblical location of the standoff between Elijah and Baal prophets at Muhraka. Wherever you turn, beauty abounds as stories from the scriptures come to life. First-time visitors to Haifa soon become returning pilgrims. 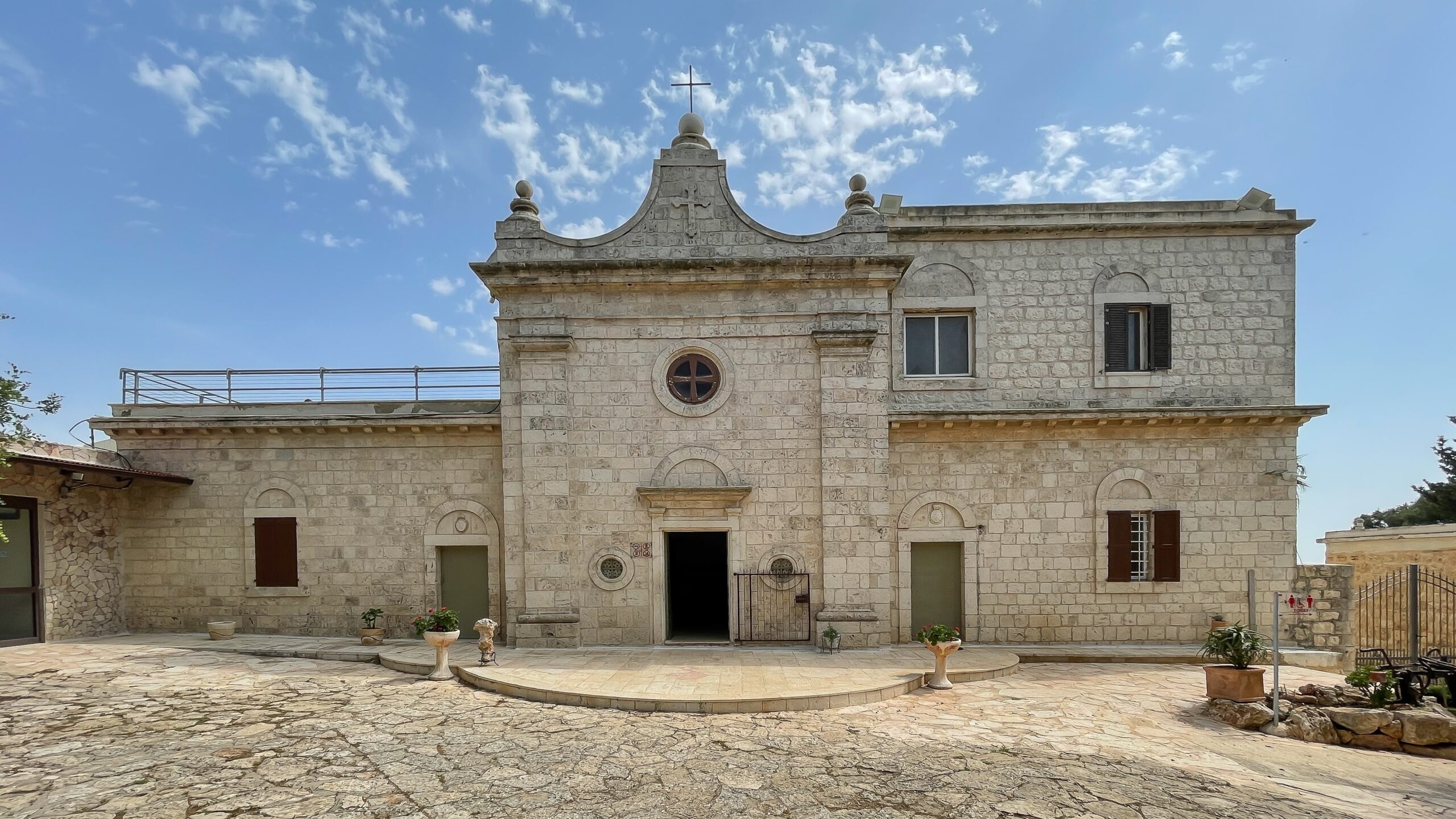 “Then the fire of the Lord fell, and consumed the burnt sacrifice, and the wood, and the stones, and the dust, and licked up the water that was in the trench.” Here at Muhraka, in the exact spot where a Carmelite monastery now stands, fire rained from the sky in the Bible’s story of Prophet Elijah. Described in Kings I, the site played host to a contest of fire-conjuring which saw the priests of pagan deity Baal exposed and defeated by Elijah and his Lord. Ever since, this area on the southern slope of Mount Carmel has been known as Muhraka, ‘Place of Burning’. Pilgrims from Christian, Jewish and Muslim backgrounds have been visiting since the 12th Century, and today you can visit the monastery which stands in tribute. Its chapel was constructed in 1883 on a former Crusader structure that marked the site, with an altar of twelve stones in the fashion of Elijah’s. You can also see a heroic statue of Elijah brandishing his sword, crafted from pristine white stone. And hard to miss as you roam is the sweeping mountainside view, where the Plain of Esdraelon, southern Galilee and the Kishon Stream unfold in panoramic splendour. Whether on a journey of faith or discovery, the site makes a lasting impression. 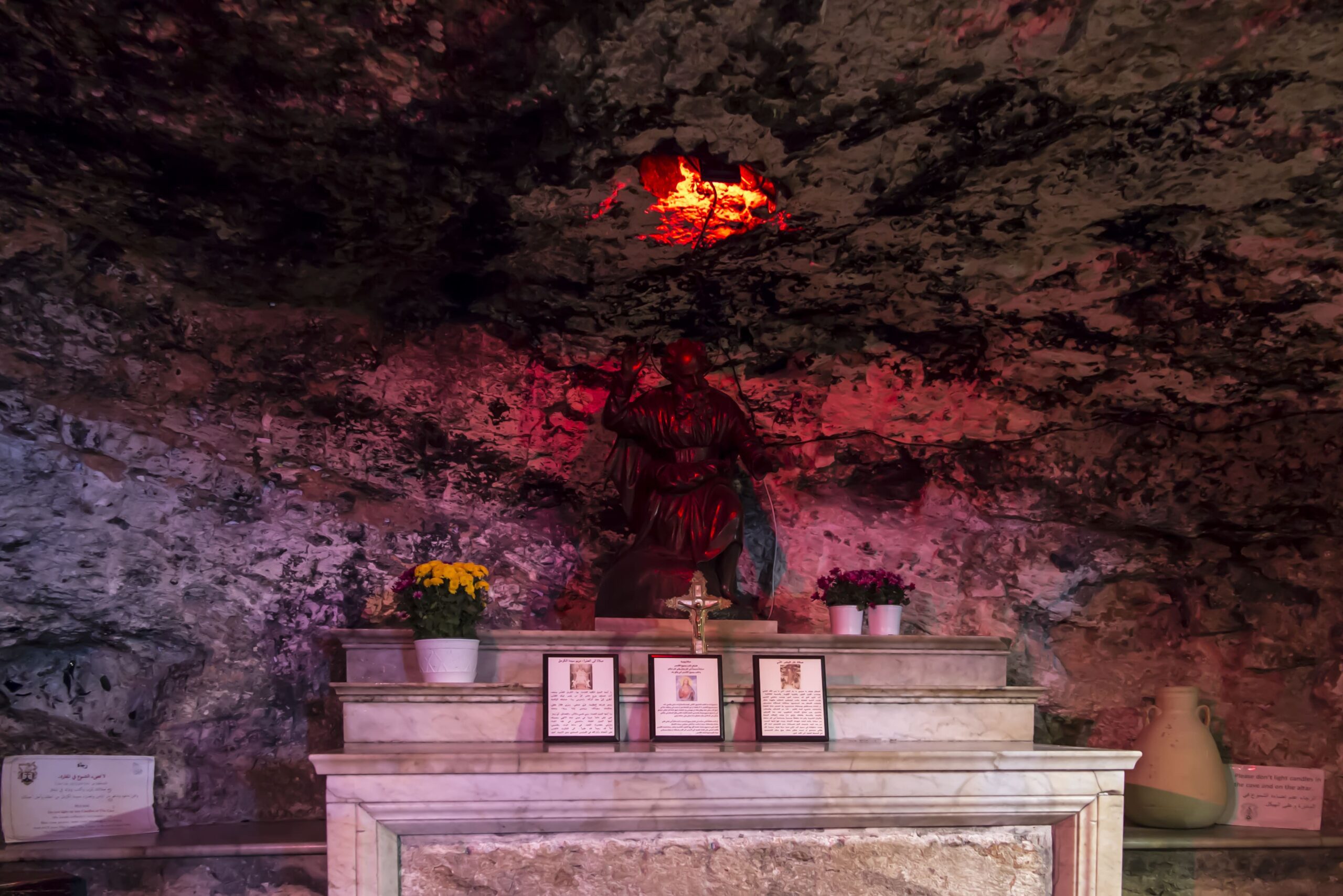 Just beneath the surface of Mount Carmel hides an unassuming spiritual treasure. A stone’s throw from a Carmelite monastery is a small grotto believed to be where Prophet Elijah occasionally took shelter. It is here where he rested after travelling for 40 days and 40 days nights, where he prayed before his encounter with the priests of Baal, and later where he hid from the wrath of Queen Jezebel. The Cave of Elijah is also thought to be where Mary, Joseph and Jesus sheltered on their return from Egypt, according to Christian tradition. And Muslims associate the site with Al Khidr, the Green Prophet. The entrance today is tucked at the bottom of a footpath, behind a velvet curtain, in the side of the mountain. Although the view inside may not be breath-taking, the atmosphere and spiritual significance most definitely is. 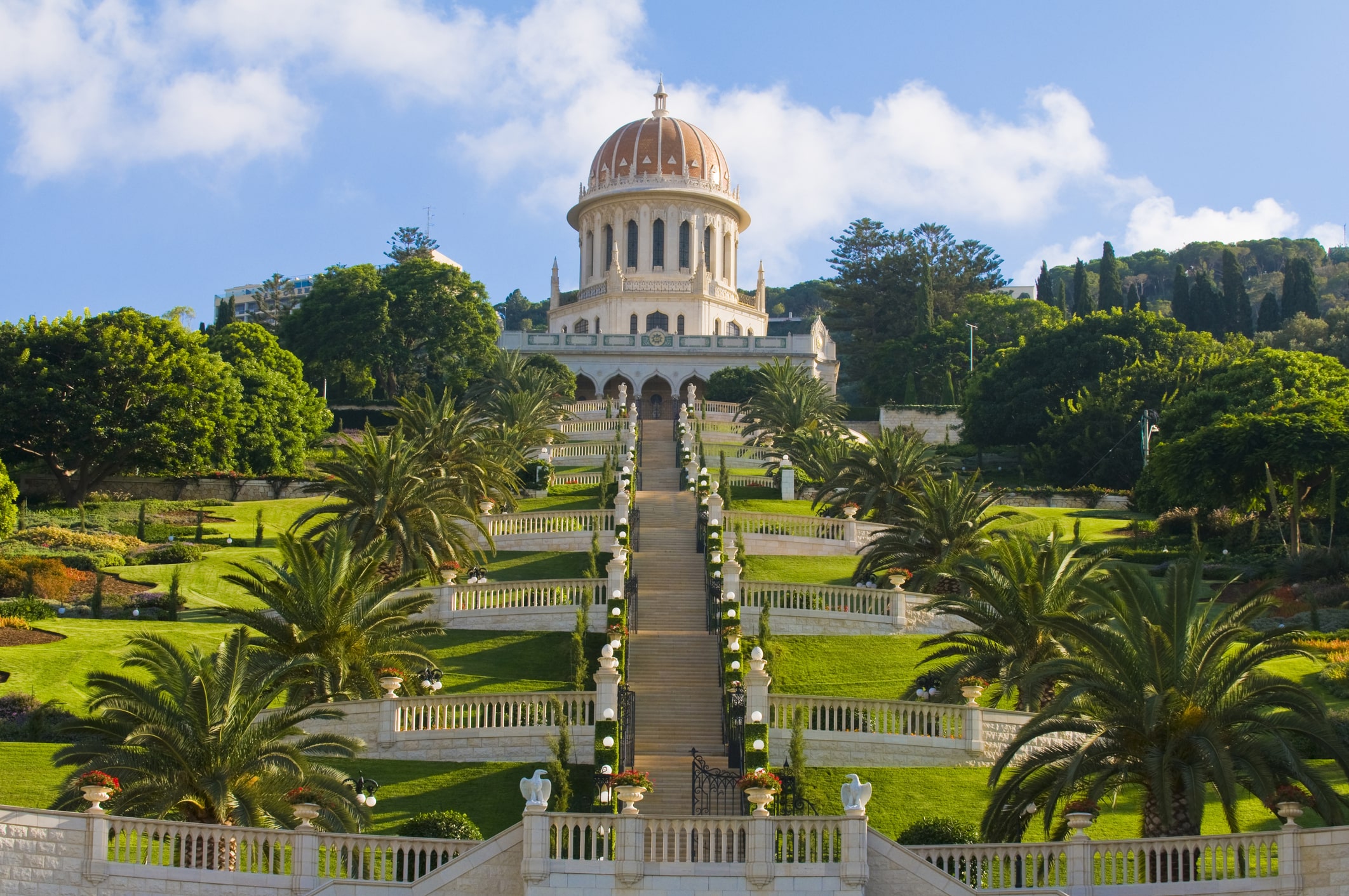 Atop a sacred mountain in one of the holiest lands on Earth, a magnificent pleasure garden blooms. Tranquil, serene and overwhelming beautiful, the Bahai Gardens are cultivated around the gold-domed shrines of the Bahai religion’s founders. At around 200 years old, the faith is a relatively new one and has faced a great deal of persecution, so the gardens are both a tribute to its origins and a beacon for a future with more acceptance and understanding. Visit for yourself to breathe in the beauty of masterful flower beds and hedgerows, enjoy the shade under a palm tree, and explore the nineteen glorious terraces that overlook the bay towards Akko, the Galilee Hills and the Mediterranean Sea. Not only an exceptional oasis to lift your spirits, the Bahai Gardens are now also a UNESCO World Heritage Site. One for the bucket list. 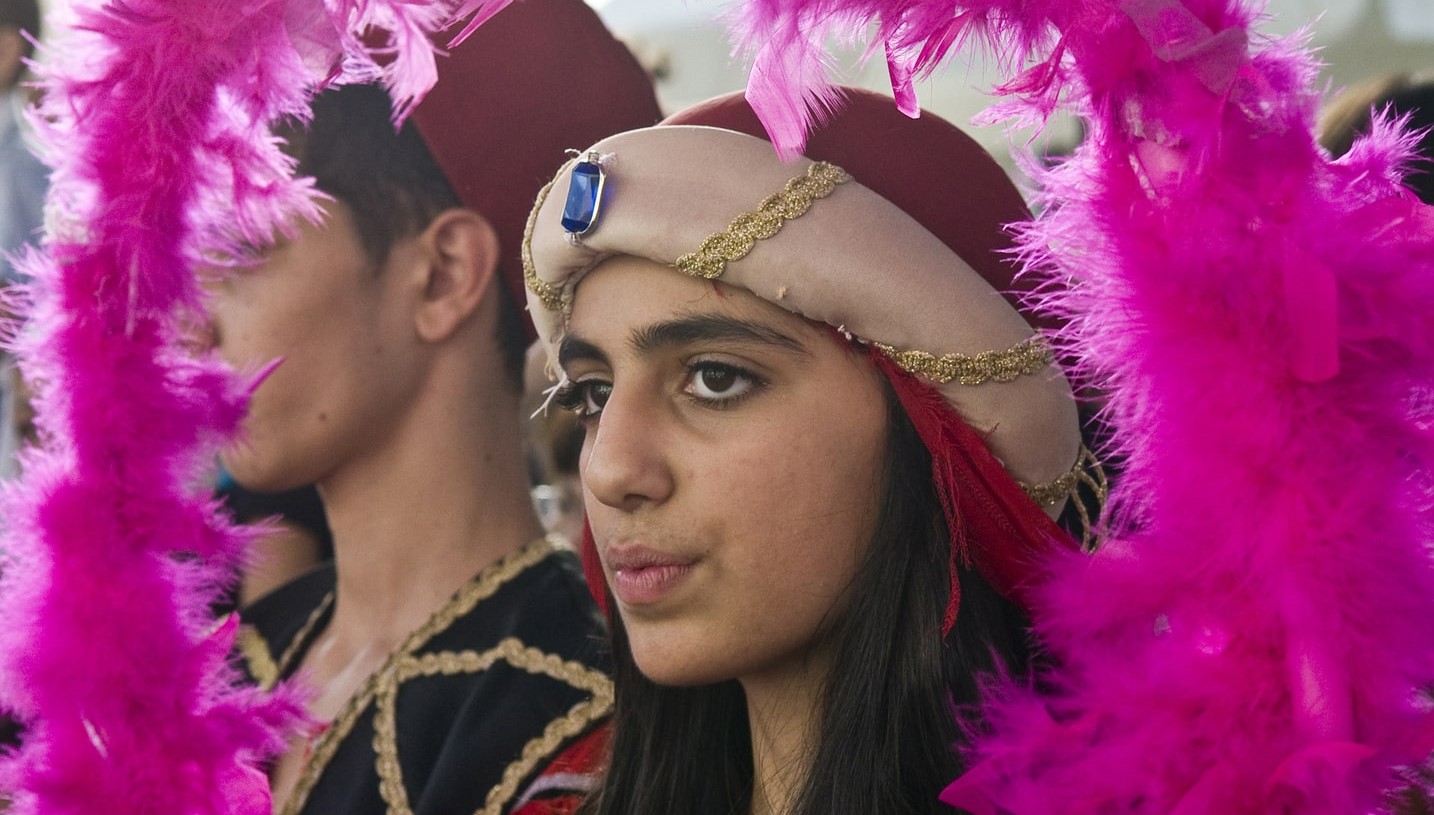 The Druze faith is one of the major religious groups in the Levant region, with around a million followers living in Syria, Lebanon and Israel. The faith’s central text, The Epistles of Wisdom, includes scripture from The Old and New Testaments of the Christian Bible, the Quran, philosophical works by Plato and Socrates, and many other diverse sources. Seen as mysterious and secretive, Druze are actually very inviting, and love to share their culture and homes. One such opportunity comes at the Druze village of Isfiya on the verdant hills of Mount Carmel, one of only two villages remaining on the mountain. Rich in hospitality, enthusiasm and warmth, the locals have even been known to invite tourists into their homes for an authentic glimpse of their religious customs and traditions. Wander through the village to meet smiling Druze, explore sleepy streets and discover old architecture in the traditional northern Israel style. Excite your senses with spicy ethnic foods at the bazaar. And take a moment to share in the history of the Druze religion at the tomb of Abu Abdallah, one of the three religious leaders who proclaimed the faith. 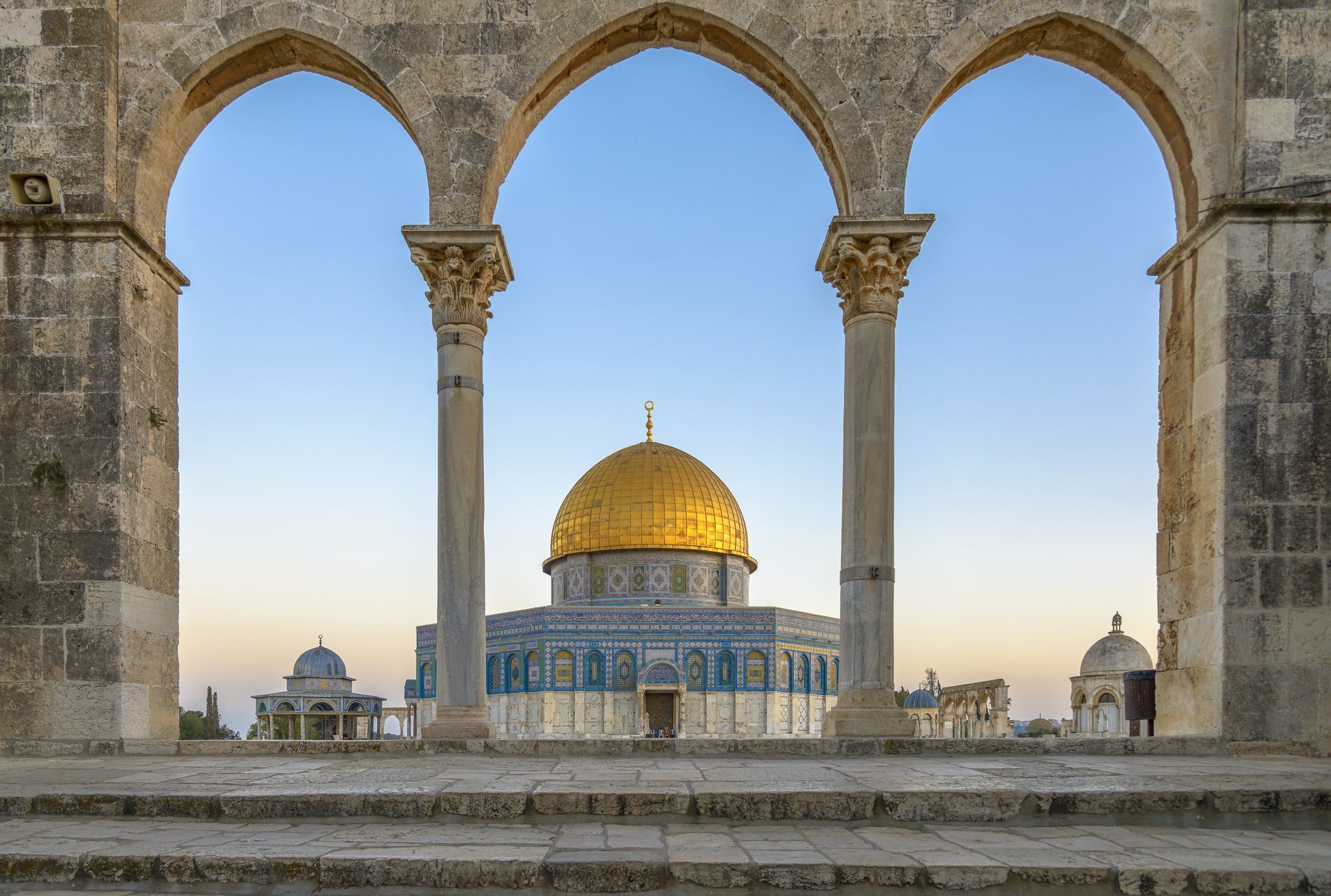 Jerusalem, the capital of Israel, is perhaps the most significant and almost certainly the best-known holy city on Earth. In no other single place can you find such a concentration of sites sacred to not just one, but three major world religions: Christianity, Judaism, and Islam. This compact ancient city, surrounded by a wall built more than 450 years ago, never fails to amaze visitors with the extraordinary religious history contained​​—and very much alive—within. Alternatively, a trip from Haifa to Bethlehem or Nazareth is an equally iconic and magical experience. With its Church of the Nativity and Manger Square, Bethlehem is everything you could hope for from the birthplace of Jesus Christ. Similarly, in his childhood home city of Nazareth, numerous holy shrines commemorate biblical events and locations. And as the Arab capital of Israel, this multicultural melting pot of ideas, religions and hopes makes for a captivating tour. The chance to set foot in any one of these cities is a once-in-a-lifetime experience. Which one is for you?