There are islands in the Mediterranean with captivating history, fantastic beaches and beautiful scenery, and then there is an island like Rhodes that quite literally has it all. Long before the days of the Roman Empire, many a maritime trail led to Rhodes, the largest of Greece’s Dodecanese islands, named for the native pink hibiscus flowers. Unlike some popular Greek islands like Mykonos and Santorini, Rhodes is lush and green, a veritable garden in the eastern Aegean. And with an area of 541 square miles (1,400 square kilometers), it’s large too. Rhodes is also home to some of the most spectacular medieval fortifications anywhere, built by the Knights of the Order of Saint John in the 14th century. The virtually intact Palace of the Grand Master in the town of Rhodes is a Gothic jewel right out of a fairytale; this, combined with the Street of the Knights and some 200 winding lanes, creates a dazzling, living tapestry.

The island of Rhodes is in many ways a microcosm of Greece. The Old Town of Rhodes, at the northernmost point of the island, is probably the best-preserved medieval city in all of Europe. Midway down the eastern side, Lindos (some 55 km south of Rhodes town) blends archaeological intrigue with a panoramic town that is more reminiscent of a Cycladic island like Mykonos. The western side, meanwhile, has many orchards and vineyards as well as impressive ancient ruins at sites like Kameiros. The island’s interior is a place of verdant forests, hills and oases of calm like Seven Springs and the Valley of the Butterflies nature park, bringing to mind the countryside of northern Greece, while the beaches you’ll find in Rhodes are among the widest and best in Greece and indeed the Mediterranean.

See All Cruises To Rhodes 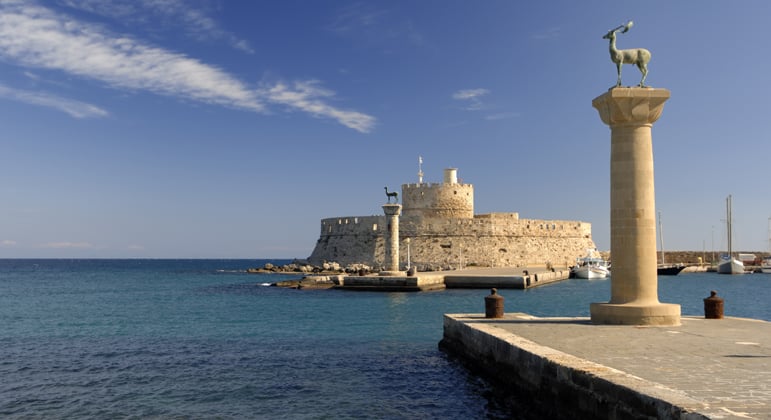 Rhodes is also incredibly “user-friendly” in that the most spectacular historical sights on the island are also very easy to access. Of course, one of the things for which Rhodes was most famous in antiquity is no longer around—the Colossus of Rhodes was a monumental statue of the sun god Helios that stood guard at the entrance to Rhodes’ Mandraki harbor for 54 years until it was toppled by an earthquake in 226 BC. Until that time, it had stood some 108 feet high making it one of the Seven Wonders of the Ancient World. Where you see a pair of bronze statues of two deers (their names are Elefos and Elafina, by the way) on either side of the harbor entrance is where each foot of the Colossus is said to have stood. The 15th-century fortress of Agios Nikolaos, at the end of the jetty, is an iconic spot to view all the daily pageantry of the harbor.

But the trade for a moment myth for magic, because that’s the best word to describe the medieval walled city of Rhodes, a UNESCO World Heritage Site. Of course, Rhodes has a massive amount of history that stretches back to the Neolithic period, the Minoan era of the 16th century BC and successive waves of settlement and conquest by Mycenaean Greeks, Dorians, Alexander the Great, Romans, Arabs, Genoese, Crusaders, Ottoman Turks and even at one point Italians. But the Gothic walled city you’ll see today is the product of the Knights Hospitaller, also known as the Order of Knights of the Hospital of Saint John of Jerusalem or more commonly, the Order of Saint John. This was a Catholic military order that made Rhodes its headquarters from 1310 to 1522 (the subsequent year Rhodes fell to Suleyman the Magnificent). The knights had seized Rhodes town in 1309 and set about making into a magnificent citadel with fairytale castle-style towers, arches with carved emblems above them, huge crenelated walls, parapets and 11 elaborate gateways. The new seat of the Knights’ Grand Master was not only a fortress but also a crossroads for seafaring merchants and Christian pilgrims. Within the compound’s maze of narrow lanes, you can visit the archaeological museum (in the former 15th-century Knights’ Hospice building), the Palace of the Grand Master which the Italians restored in 1939, Street of the Knights, Cathedral of the Latins and Basilica Mercatorum. One of the great thrills is not in any museum but rather outside: from noon to 3 PM daily you can actually walk on top of the walls of the Old Town, which start at the Palace of the Grand Master and extend for four kilometers. 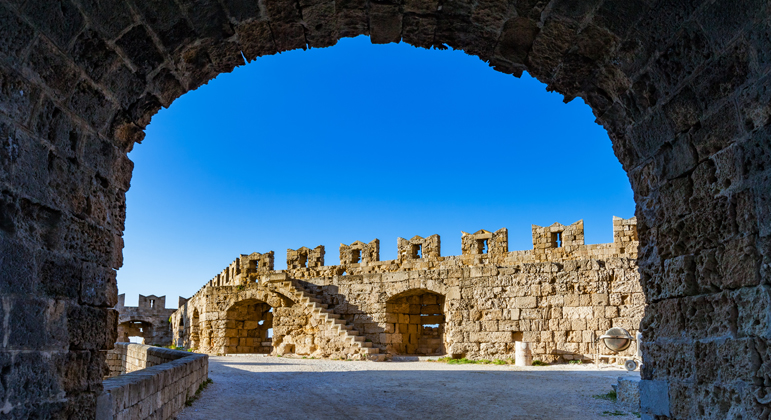 In the lower town outside the walls, there is an array of architecture from the Ottoman era. There are ancient houses and hammams (public baths) to see, the Clock Tower, well-preserved Byzantine chapels and minarets, Square of the Jewish Martyrs with its Seahorse Fountain, as well as the Mosque of Suleyman the Magnificent. Another gorgeous hidden gem is the Panaghia Bourgou, a partly collapsed but still gracious Gothic monument. Elsewhere in the mix. there is even Italianate architecture—having snatched it from the Turks, Italy was in charge of Rhodes during the first part of the twentieth century. All this heritage in such a compact place is truly a marvel, and an unrivaled array of bustling cafes, restaurants (try Marco Polo for its sophisticated menu and sweet garden) and shops make the experience of visiting even more enjoyable. 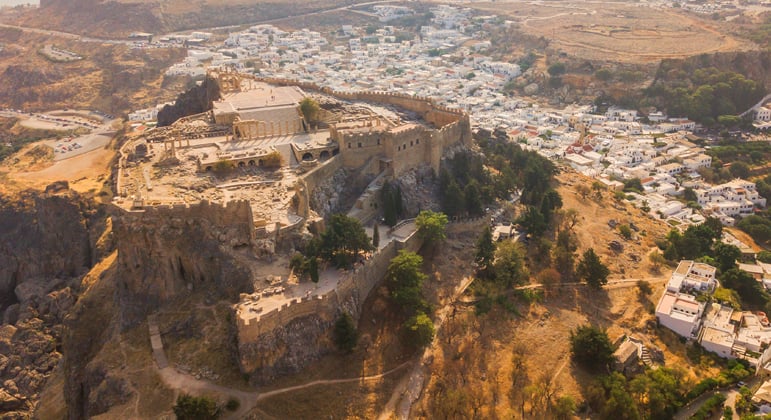 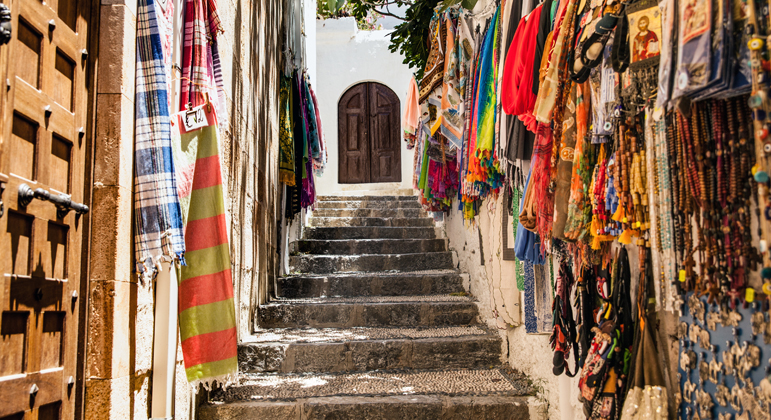 Fabulous Lindos is the place where Saint Paul is said to have disembarked when he arrived on Rhodes to proclaim the advent of Christianity. Journeying south from Rhodes town route to Lindos you’ll pass by the modern beach resort area of Faliraki. Lindos is definitely a throwback to another time with its swirl of white houses with wood-carved balconies, some preserving aspects of their 15th-century decoration, and 17th-century sea captain’s houses whose entrances are made with volcanic tuff blocks behind which are pebble-mosaic floors. There are myriad great restaurants from which to choose; you could enjoy a fine dinner at Mavrikos or perhaps the restaurant of the Melenos Lindos Hotel. 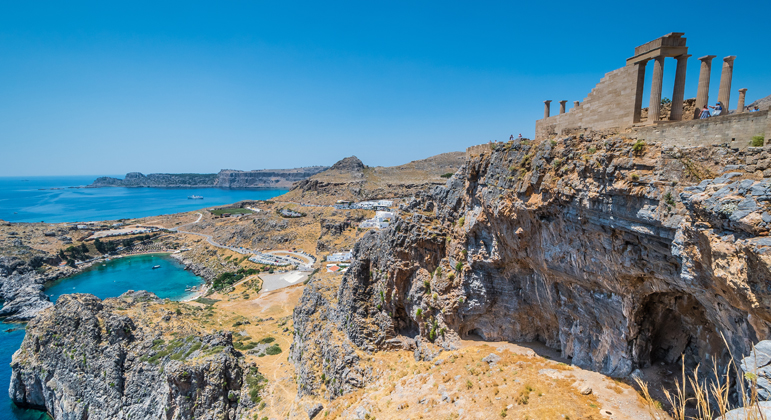 The real showstopper in Lindos however is its acropolis, which you reach after a steep 15-minute hike. Many ancient treasures are perched on the summit, with natural ports on either side. The acropolis was founded by the ancient Dorians and it houses the fourth-century B.C. sanctuary of Athena Lindia: its monumental entrance, as well as a Hellenistic temple and stoa (arcade), have been partly reconstructed. There are also ruins of a theater with 26 tiers of seats, a colonnaded shrine to the god of wine, Dionysus, the round Tomb of Cleobulus and a rock-cut relief of a trireme navy vessel from 180 BC. Civilizations overlap to mesmerizing effect atop the Lindian Acropolis. The Hellenistic Greek citadel was fortified by the Romans and Byzantines and yet again by the Knights of St. John (you can still see what remains of the knight’s castle). The walled ruins have as their backdrop the shimmering blue of the Mediterranean Sea—it’s a breathtaking vista straight out of a pirate movie, only better because it’s not a film set, it’s all spectacularly real!