Syros is The Aegean’s Treasure Island

Everything about delightful, sunny Syros seems designed to amaze you and nothing about this island, which is at the geographical center of the Cycladic island chain, is ordinary. Syros was among the many Aegean islands included in the nascent Greek state in 1832. The elegant port city of Ermoupoli, which serves as the capital of the prefecture, was constructed mainly in the 1820s, during the time of the Greek War of Independence. It prospered enormously, something reflected in its proud neoclassical architecture. Of course, Greece means ancient history too: the name Syros comes from the Phoenician word for blessed or wealth, and the island was mentioned by Homer. There were pirates, Saracens, Venetians, the corsair Barbarossa… and others. When the Greek Revolution broke out in 1821, Syros absorbed Greek refugees from Aegean islands still under Ottoman occupation such as Chios and Psara, and these new arrivals greatly enriched Ermoupoli which took on the look and atmosphere of a small city of Western Europe. Even today the town keeps its character as one of the more unusual places in the Greek islands. Approaching by sea you’ll notice that two large hills dominate the port: one is the old town of Ano Syros, with the 13th-century Catholic cathedral of St. George at the very top (under Ottoman rule most of the inhabitants were Catholic). The other hill is crowned with a Greek Orthodox church. In cosmopolitan Syros, Catholics and Orthodox islanders celebrate Easter on the same day. 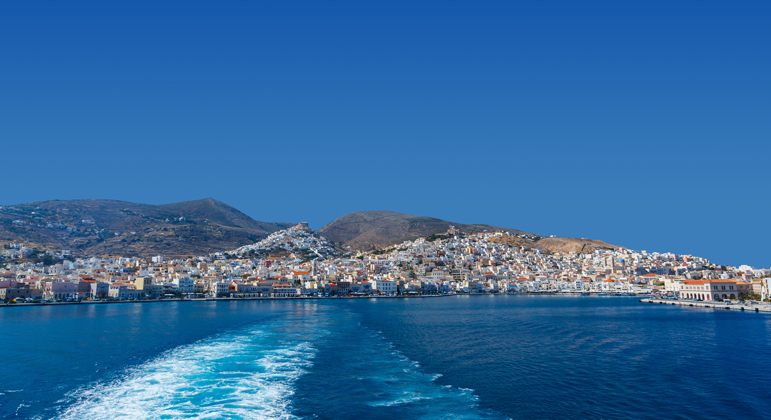 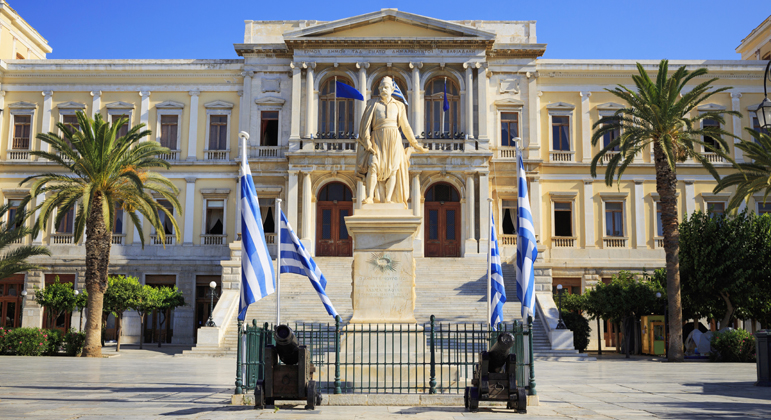 From the sea Ermoupoli rises like a Hollywood vision of the perfect Mediterranean island paradise; by contrast to the “classic” Cycladic island look of whitewashed, cubiform houses nestled near the water, the sublime buildings here bespeak an architectural legacy at once uncommonly affluent and proudly eclectic. No ancient city this: it was literally created by Greek island refugees in the 19th century, a population that could be described as a hunted but ambitious people who shrugged off adversity to follow their dreams and in so doing transformed a once-obscure island town into a major trading center of the eastern Mediterranean and one of the most prestigious intellectual centers of modern Greece. Ermoupoli was for a long stretch the chief shipping, industrial and commercial center of the new Greek state. The impressive Neorio Shipyards, which played a major role in the industrial history of Greece, are on your right, while the harbor facing Akti Ethnikis Antistaseos is lined with cafes, shops and restaurants of all stripes. (For seafood it’s hard to go wrong anywhere, but if you have a hankering for pizza or pasta, Amvix at no. 26 is the best Italian restaurant in Syros.) Close to the seafront promenade you’ll find the church of the Assumption of the Virgin, which is unassuming from the outside but has an icon by El Greco inside. 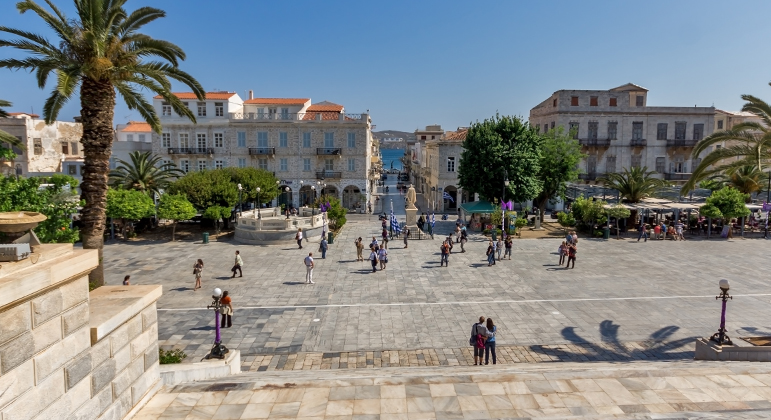 Walk up Eleftherios Venizelos Street, which begins at the National Resistance Monument and you will cross the shopping street of Petrou Protopapadaki. The gracefully curving street is paved with marble and even a short stroll here will convince you that Ermoupoli, named for the ancient Greek god of trade and travel, Hermes, lives up to its name. Pop into a bakery to try some of the local specialties such as Syros logboumi, a kind of marshmallow in keepsake packaging, halvadopites (nougat pies) or pastelaries (sun-dried figs with sesame). If your appetite is for the history you must head to Miaouli Square, a broad plaza lined with neoclassical buildings with Ermoupoli town hall, completed in 1891 and designed by architect Ernst Ziller, as its centerpiece. It also houses the island’s small archaeological museum, with finds from the prehistoric period to late Roman times, in one corner. As a dining destination rivaled perhaps only by nearby Mykonos, Syros attracts a well-heeled crowd to tables in this area such as Avant Garden, which serves creative Aegean cooking in a garden setting, while the beautiful Mazi wins praise for its inspired Greek cuisine. 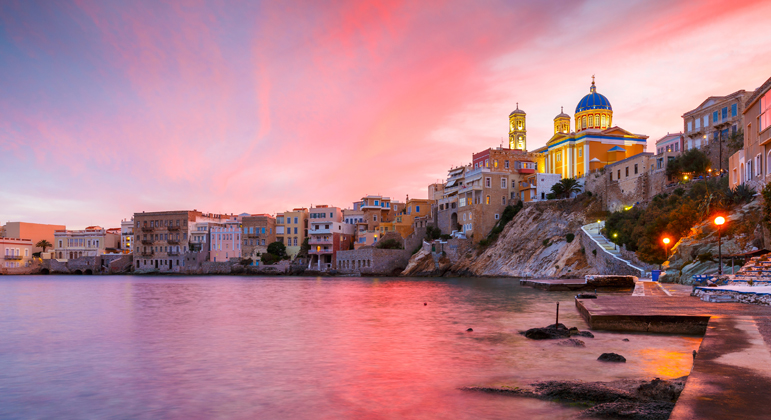 Wandering just a bit from the grandeur of Miaouli Square brings you to another elegant and perhaps even more atmospheric part of the town, the district of Vaporia (also called Little Venice, but not to be confused with the “Little Venice” of Mykonos). You’ll pass the landmark Apollon Theater, a municipal theater and opera house completed in 1864 and modeled after La Scala in Milan. Soon you’ll find yourself in a quiet neighborhood of shipowners’ townhouses, many with balconies accented with marble corbels that stretch over huge wood-carved doors. Many of the homes trace the contours of the sea’s edge and in fact, at the point where you reach the church of St. Nicholas with its signature large blue dome (you can spot it on your approach to the harbor by sea) you’ll be able to walk down an incline that leads to the charming “urban” beach called Asteria. You can enjoy a coffee, snack, or salad at the beach bar cafe there of the same name and yield to temptation by joining the locals for a quick dip in the calm aquamarine waters, with the elegant buildings of Vaporia as your backdrop. 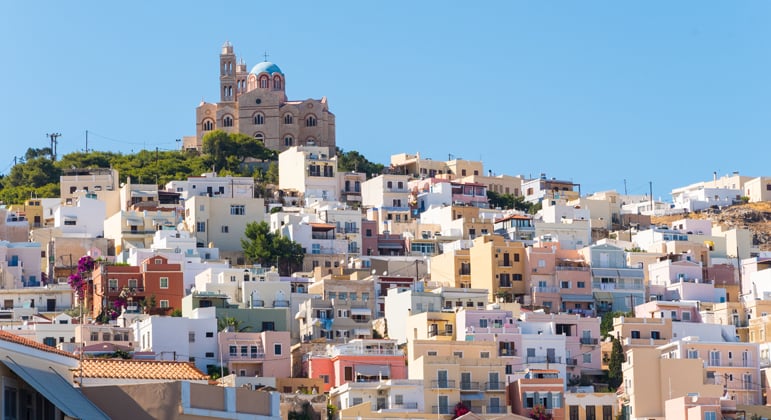 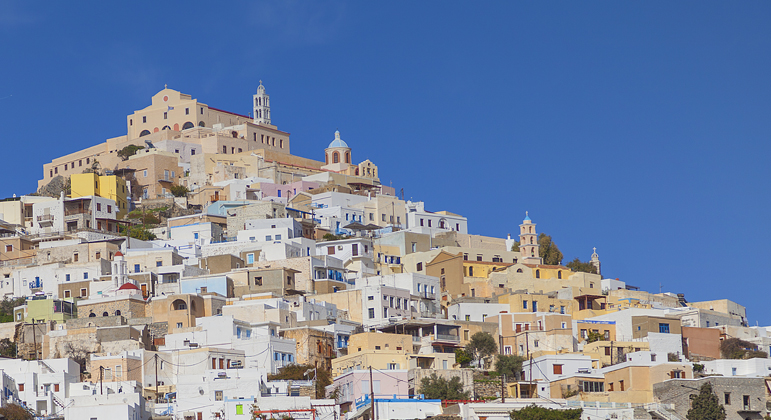 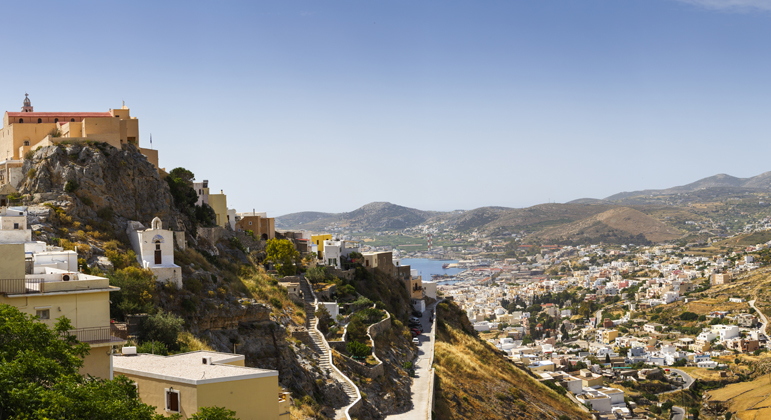 Just like Paris has the hill of Montmartre and the Sacre-Coeur cathedral at the top, Ermoupoli has Ano Syros, also called Apano Hora and meaning Upper Town, where the Basilica of St. George has stood guard since 1598. This is a very ancient part of town, founded as a Venetian settlement as far back as 1200. The center of the island’s Catholic community, Ano Syros is also home to a Jesuit monastery and a Capuchin monastery, the latter with the 17th-century church of San Giovanni. It was also home to Márkos Vamvakáris, a famous Greek musician of the 20th century considered the patriarch of the rebetiko, a kind of Greek popular urban song. You might consider a short taxi ride (it’s around five euros) from the port to save yourself the time of tackling Ano Syros’ steep slopes. However you get here, your reward is savoring narrow cobbled streets that are a throwback to another time and savoring the breathtaking views of both the port of Ermoupouli and the nearby Cycladic islands of Tinos and Mykonos. From these windswept heights the incredibly rich cultural tapestry of Syros, embroidered with maritime pride and Greek revolutionary heritage, is yours to treasure.