The Simply Divine Island of Patmos

Could any Greek island be more a picture of perfection than beautiful Patmos? It isn’t every place that can be called the Jerusalem of the Aegean, but then Patmos is the custodian of an exceptional cultural heritage because it is the island where John the Apostle wrote the Book of Revelation, the final book of the New Testament. This starring role in the Bible imbues the island with an unmistakable spiritual calm that makes it truly unique in the Mediterranean and a magnet for the Christian faithful. And the atmosphere is even more special on account of the fact that the religious ceremonies and customs still taking place haven’t changed since early Christian times. Adding to the sense of tranquility is the fact that Patmos has no airport—as in centuries, past arrival to the island is by ship or ferry only. Approaching Patmos by sea, you can’t help but be bewitched by the chiseled contours of the coast and you’ll find that serenity reigns onshore in equal measure.

And it’s easy to understand the pull Patmos had on the imagination of the ancient Greeks. According to the myth, it was Artemis, goddess of hunting, who found the island submerged under the waves and asked Selene, goddess of the moon, to illuminate and raise it. With Zeus and Apollo joining the effort, they hoisted the island up from the seafloor. Perhaps coincidentally Patmos is shaped like a seahorse, its two main portions joined by a narrow isthmus at Skala. Just five kilometers south from there Chora, the inland island capital crowned with the fortress-like Monastery of St. John the Theologian.

See All Cruises To Patmos 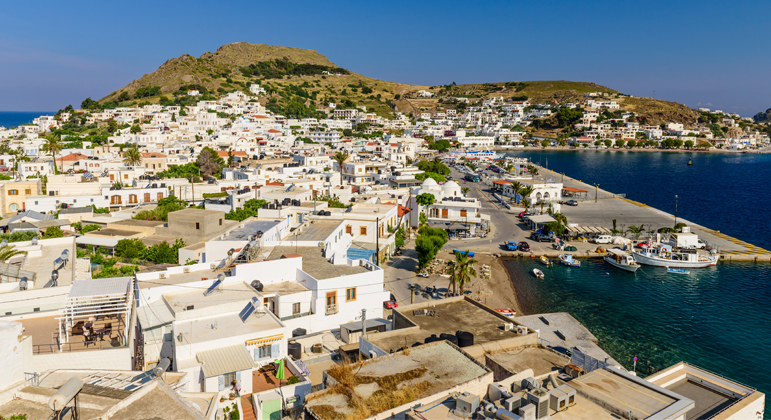 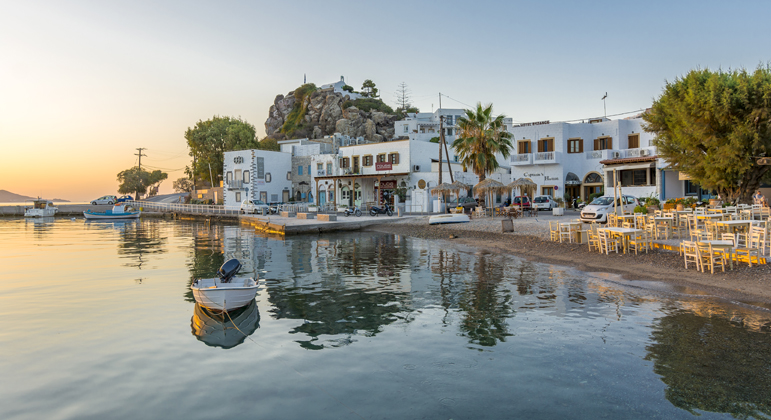 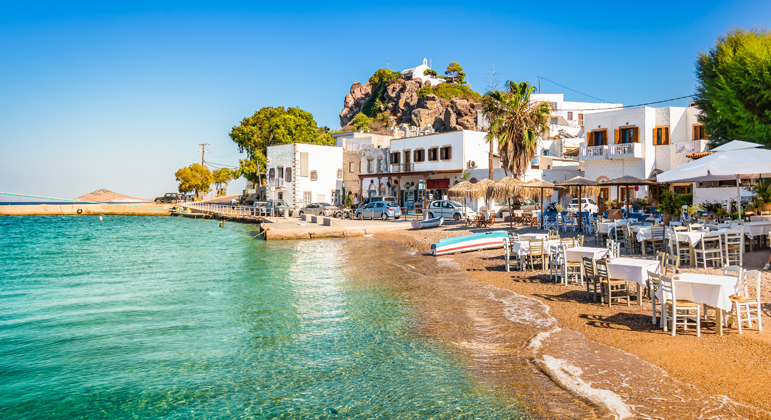 Patmos is situated in the northwestern part of the Dodecanese archipelago, 163 nautical miles from Piraeus. Its 63 kilometers of coastline form a scenic ribbon of beaches, bays large and small and hidden coves, encircling a gorgeous landscape by turns volcanic and rocky, with rugged peaks rising over hidden green valleys. Skala, the island’s main harbor and commercial center, is where you’ll get the first taste of Patmos’s easy charm, with its winding whitewashed alleyways, upscale boutiques and cafes set close to the sea. It’s also the center of the island’s cosmopolitan nightlife (but think cafes and bars more than Mykonos-style clubs!). Be on the lookout for “insider” tavernas like Trehantiri where fresh-caught fish and hand-cut French fries rule the day. 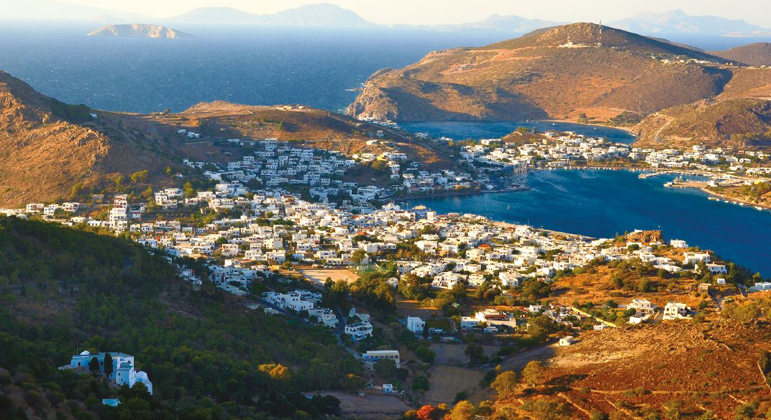 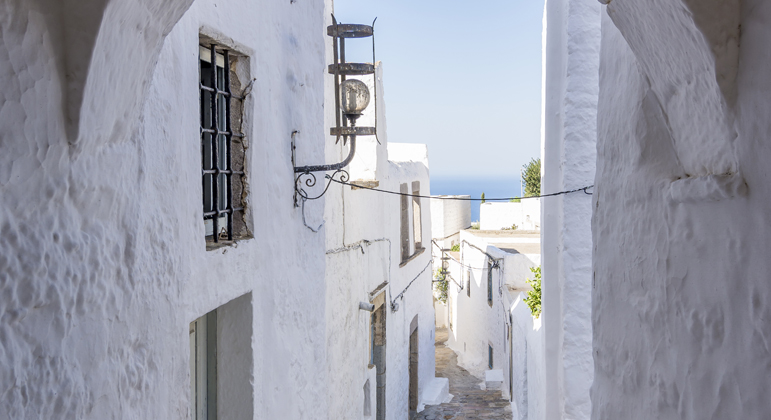 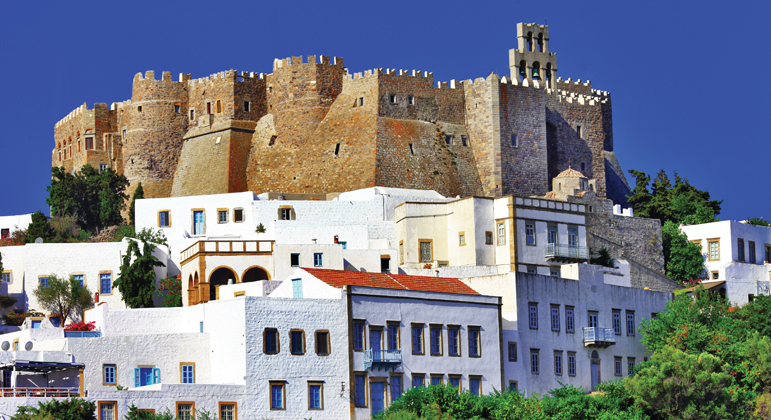 But the most iconic town on Patmos is certainly Chora, which together with the Monastery of St. John the Theologian and the Cave of the Apocalypse is a UNESCO World Heritage Site. There are art galleries and cafes galore, but the monastic complex is the defining feature of Chora and sits on its highest point—truly stunning in its sturdiness, it’s nothing less than a monumental lookout post for Christendom. The Byzantine monastery itself was built in 1088 by St. Christodoulos and features extremely high stone ramparts over which boiling oil could be poured on pirates and invaders. Its crenellations and towers give the monastic complex the appearance of a polygonal castle from the outside, while inside the monastery walls are a cathedral and eight chapels. The island’s trademark trio of stone windmills stands guard nearby the walls.

The ancient settlement of Chora is one of the best-preserved in the Aegean, having evolved without interruption since the 12th century. It is the only example of a Greek Orthodox monastery that from its very origins integrated with a supportive community built around the hilltop fortifications. The narrow streets around the monastery are lined with whitewashed houses having the characteristic flat-topped roofs that were originally designed with defensive purposes in mind. The settlement started to expand in the 13th century, with other important phases in the 15th century when refugees arrived from Constantinople and in the 17th century from Crete. The two- and three-story neoclassical houses are mostly from the late 16th and 17th centuries when Chora flourished as a trade center under Ottoman occupation. Nowadays these former merchants’ residences, many with ravishing sea views, are highly sought-after properties for part-time island residents. The Astivi Bar and Restaurant is actually located inside one and makes for a great spot to enjoy pizza, pasta, or a cocktail in an elegant setting. 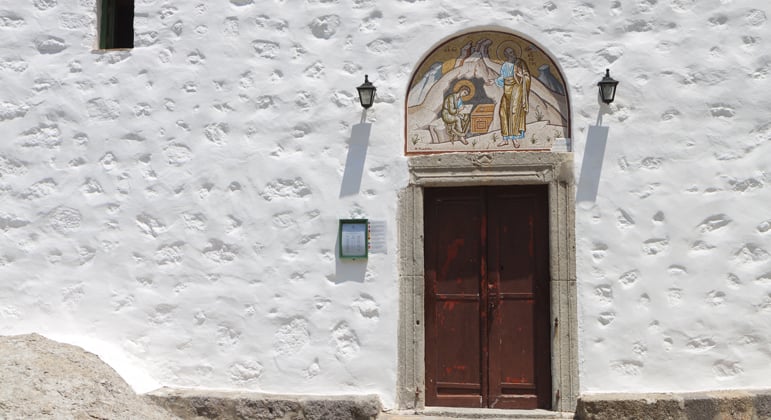 Cave of the Apocalypse

The spiritual heart of Chora and indeed of Patmos is the Cave of the Apocalypse where tradition holds that John the Apostle and Evangelist (St. John the Divine), having been expelled from Ephesus in present-day Turkey in 95 AD, dictated the Book of Revelation and his Gospel to Prochoros, his disciple. The small cave is located inside an unassuming ensemble of churches, chapels and monastic cells about midway along the steep winding road between Chora and Skala. Behind a simple white facade and green door, above which is a mosaic depicting John with his disciple transcribing the Apostle’s visions into writing, is the actual cave. The quiet space is replete with Byzantine icons and religious relics and if you look carefully you can see three fissures in the rock that are said to represent the Holy Trinity of God. This sacred site more than any other on Patmos gives the island enduring importance for Christian pilgrimage. 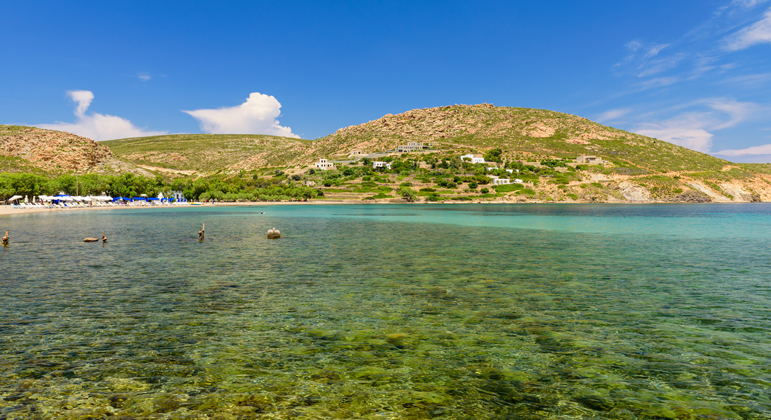 If faith has shaped the island’s history and unique place in the Greek archipelago, the blue sea is also what makes it splendid. So, if you have time, try to fit in a swim at one of the island’s numerous excellent beaches. One of the most iconic is south of Chora at the charming village of Grikos—look for the big rock called Petra to the right of the beach. For a memorable gourmet dinner here, try the restaurant Apocalypsis, where cod fritters with cream potatoes and garlic confit tempt as much as the seaside setting. Agriolivado, three kilometers north of Skala, is a fine family-friendly beach with sun loungers and umbrellas. In the north at Geranou, right on the Patmos seahorse’s snout, there’s a beautiful sandy beach framed by crystal-clear waters: like most everywhere else on this exceptional island, it’s simply divine!