The best way to greet Dikili is from the sea as the turquoise waters give way to a vision of golden sandy beaches at the edge of a beautiful bay, and the promise of enchanted green landscapes just beyond. Dikili is one of the traditional Holiday destinations of the large Turkish port city of Izmir and makes for an idyllic summertime pause for its small villages, fish restaurants, and scenic landscapes that the seaside village of Bademli to the south and a bit inland thermal springs and a waterfall at Nebiler, on the Kemente Plateau. But pry yourself away from this gorgeous stretch of the coast because Dikili is also the springboard to the glorious ruins of Pergamon, one of the most beautiful and significant of the ancient Greek cities of Asia Minor and today a UNESCO World Heritage site. Pergamon is home to some of the most evocative archaeological sites not just in Turkey but in the entire Mediterranean world.

See All Cruises To Dikili 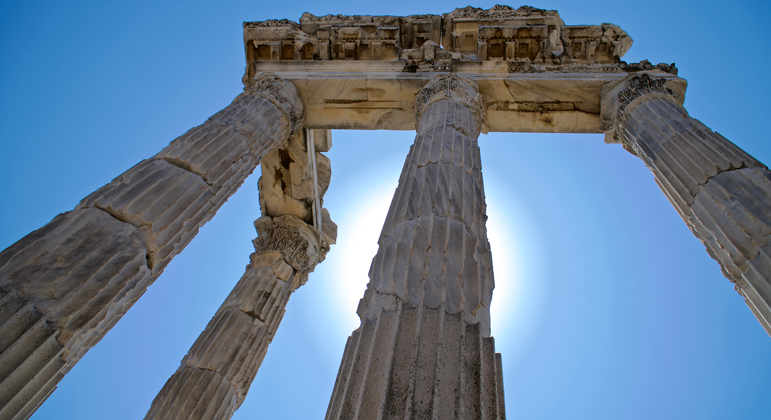 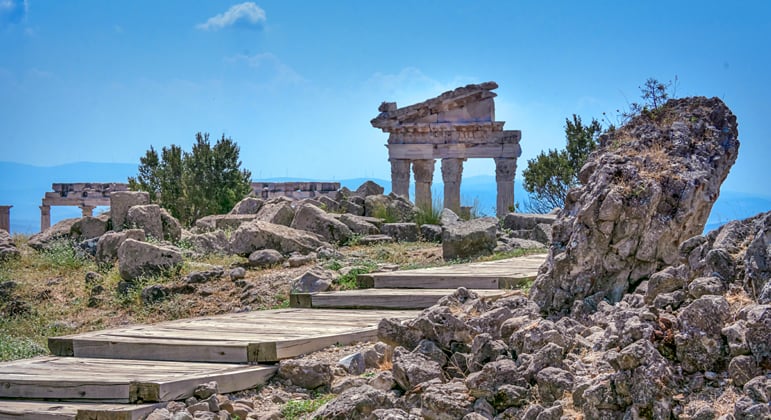 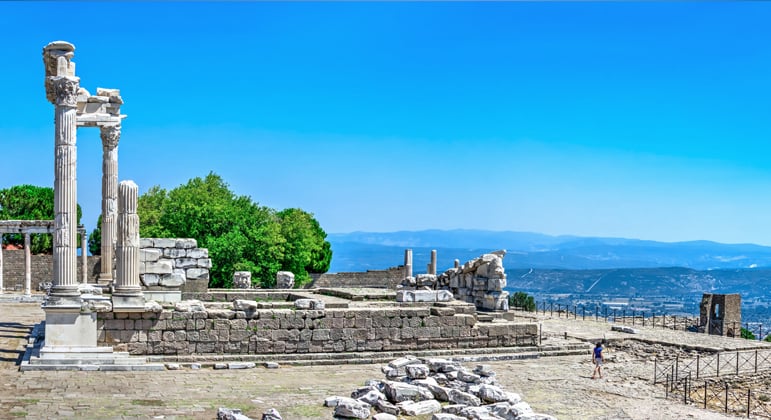 With Troy to the north and Ephesus to the south, the classical ancient city of Pergamon is located some 16 miles inland from the Aegean Sea on a promontory that looms above the modern Turkish city of Bergama. Thanks to its strategic location it was rebuilt repeatedly throughout antiquity but experienced its heyday in the Hellenistic period, in the second century BC after Alexander the Great had wrested Pergamon from Persian rule. As the Kingdom of Pergamon under the successor Attalid dynasty, the city became a center for culture, health and the arts and was described as “the most famous and magnificent city of Asia Minor” by Plinius Secundus, the first-century AD author and philosopher. For a time, it had the world’s biggest library and a flourishing trade in parchment (the word actually comes from the name Pergamon) and spectacular sculptures dazzled locals and travelers of yore alike. While there are remnants from different eras, the most spectacular ruins date to the reign of the Attalid ruler Eumenes II, who oversaw such works such as the Library of Pergamon and Altar of Zeus during his reign, from 197 to 159 BC. The vast site consists of some 220 acres centered on an acropolis that rises nearly 1,100 feet (335 meters). There are also ruins of the lower city and the famous Asklepion healing sanctuary. 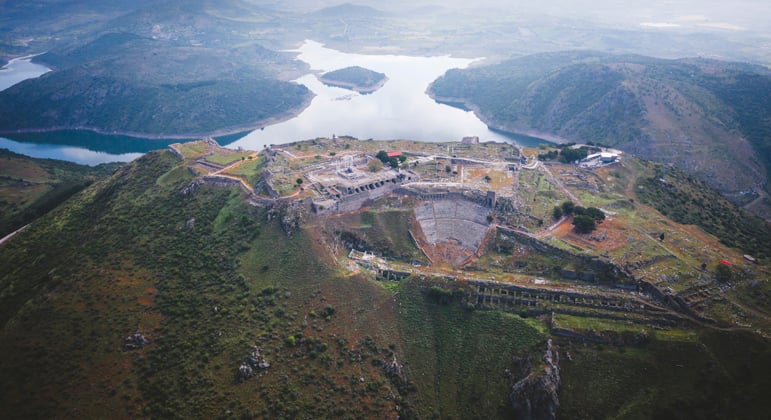 The star attraction of the upper Acropolis of Pergamon (which was intended to rival the Acropolis of Athens) today is arguably the ancient Hellenistic theater, carved into the hillside and which at 36 meters high is the steepest theater of the ancient world: the commanding view from here must have stolen every show! It seated more than 10,000 people in 83 rows and if you look closely you can still see the post holes for the theater’s portable wooden set. On the north side of the Theatre Terrace are the ruins of the Temple of Dionysus, the god of wine and theatrical performances. The Temple of Athena is originally from the 4th century BC but it was modified by Eumenes II around 170BC. On a terrace below it stood the great Altar of Zeus, a monumental temple that took 20 years to build and could once be seen for miles around. The famous tall marble reliefs depicting an epic battle between the gods and giants have been dodging the Aegean sun in the confines of Berlin’s Pergamon Museum since the early 1900s, but you can still make out the impressive foundations of the horseshoe-shaped altar. Interestingly, when John the Apostle listed the Church of Pergamon as one of the Seven Churches of Revelation, he may have referred to the altar as the “throne of the devil” on account of its large size.

Elsewhere on the acropolis, you’ll find the Temple of Demeter, which was built by Philetaerus, the founder of the Attalid dynasty, and enlarged by Appolonia, the wife of Attalus II. Then there’s the large gymnasium area, on three terraces. The stairway that connects its lower level to the second is a remarkably well-preserved example of vault and arch construction. Ruins of the Sanctuary of Hera are here as well. The acropolis was mainly reserved for royalty, so it’s fascinating to walk the main street that connected the acropolis with the commercial part of the city, once lined with shops and warehouses. Notice the marks of chariot wheels in the marble pavements! The reconstructed Temple of Trajan, incidentally, is the only entirely ancient Roman ruin at Pergamon. 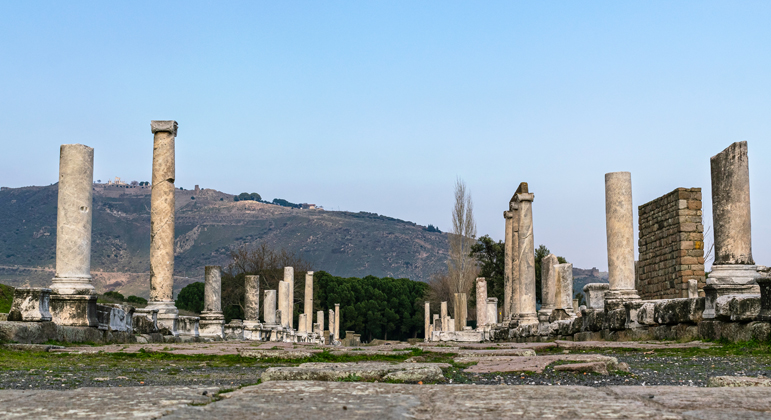 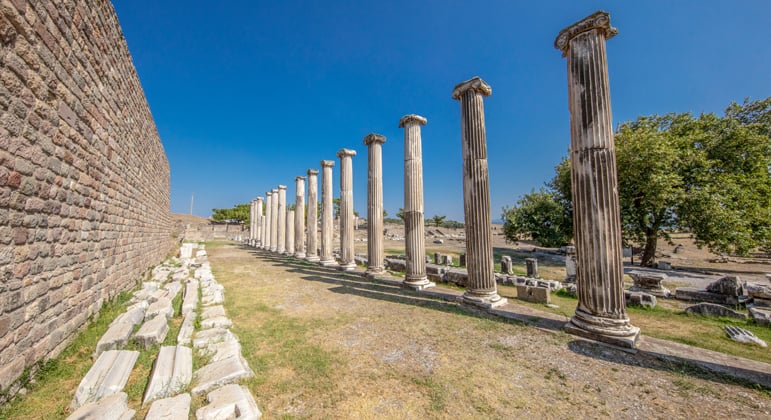 The ruins of the celebrated Asklepion sanctuary of health and healing lie at the foot of the acropolis, about three kilometers or two miles south of the promontory. Pergamon’s Askeplion (also spelled as Asclepieon) was renowned in the ancient world; Asclepius was the mythical son of Apollo and a god of medicine and healing. The “doctors” at the sanctuary were really his priests, who cured patients with a mix of thermal water baths, a special diet, exercise, and music. Excavations date the construction of the temple complex to the 4th century BC, but it mainly flourished during the Roman period, thanks to the efforts of Hadrian who added the colonnaded Sacred Way that led to the Askleopion’s entrance gate, or Propylon. Beyond it were the main circular temple (once domed like the Pantheon in Rome) and rooms for massages and mud baths, plus a trio of fountains, all connected by ornate porticoes. A theater seated 3,500 spectators. One of the most fascinating elements of the Asklepion is The Sacred Tunnel, a 266-foot long passage that leads from the center of the sanctuary to a mysterious two-story round brick building from the Roman era, a time when the accomplished physician Galen worked at Pergamon. Some believe the tunnel, which was surrounded by shrines to other gods of healing like Hygiea and Apollo, may have helped induce dreams of Asclepius, whose appearance in a patient’s dream could then be interpreted by the resident priests to help guide the healing process. 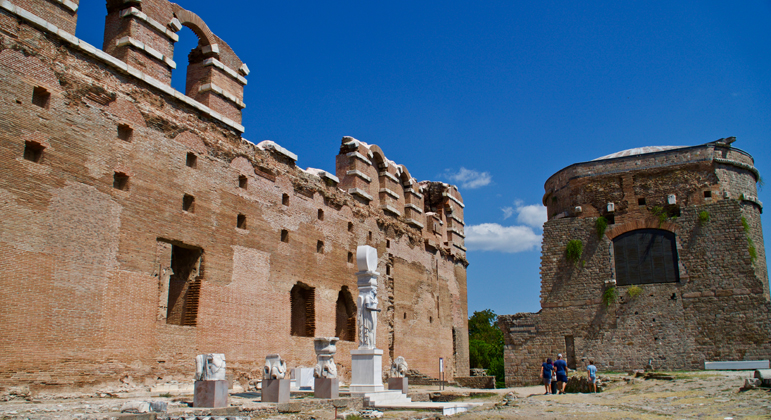 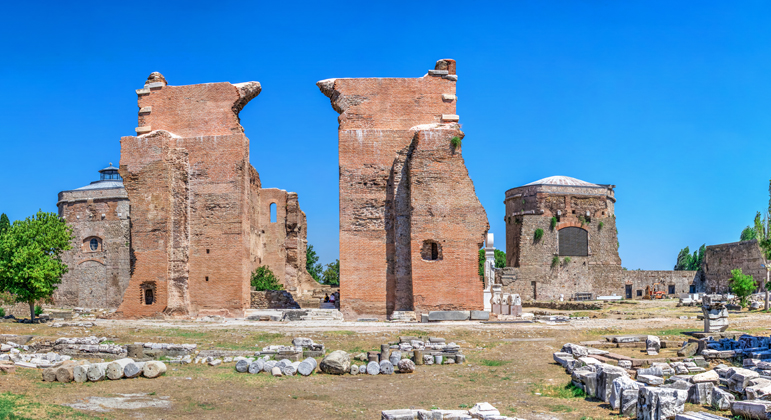 The cathedral-sized Red Basilica, built in the 2nd century by the Romans as a massive temple to the Egyptian gods Serapis, Isis and Harpocrates, is one of the largest ancient structures surviving from antiquity. Located about one kilometer south of the Pergamon acropolis, its complex included the main building, two round towers, a vast temenos or sacred area, and underground tunnels and chambers. It was so enormous that the early Christians of Pergamon actually built a basilica within it, rather than converting the entire building into a church. The Pergamon Bridge, by a forecourt of the Temple of Isis section, was designed during the reign of Roman Emperor Hadrian and is still intact today.