“There is a homeland for everyone, while there is Thessaloniki,” wrote Nikiforos Choumnos, a 14th-century Byzantine dignitary and scholar. And he was right: Thessaloniki is a gorgeous and cosmopolitan seaside city and the largest in Greece after Athens. This historic capital of the Macedonia region was founded in 315 BC by the Macedonian king Cassander and named after his wife who was a half-sister of Alexander the Great. This is the city that in the days of Philip II of Macedon would steal Athens’ thunder. It’s relatively flat but there are simply mountains of history: Roman and Byzantine ruins, early Christian heritage (the Apostle Paul brought the first message of Christianity here in 50 BC), Pontic Greeks and Armenians, remnants of Venetian and Ottoman rule and perhaps most movingly, a remarkable Jewish history too. Centuries of cultural commingling has also made Thessaloniki a culinary nirvana, with almost too many great restaurants and little eateries to count.

See All Cruises To Thessaloniki 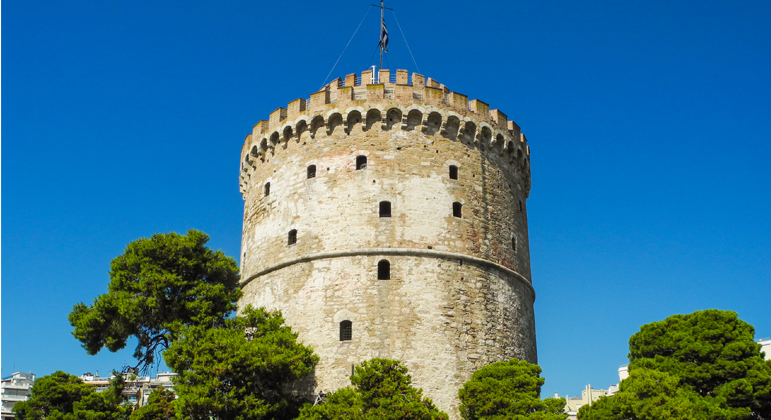 The round, somewhat chunky six-story White Tower is Thessaloniki’s most famous landmark. It was built in the late 15th century facing the sea. By the 19th century, it was known as the Tower of the Janissaries or Blood Tower because it served as a jail for prisoners on death row whose lives were eventually taken by the Janissaries, who were the Sultan’s elite infantry troops, on the ramparts. It was painted white in 1890. Despite the dark past, the tower is now a fun spot from where “boat bars” go for short runs in the Thermaic Gulf. Just as iconic is Thessaloniki’s long seaside promenade which extends the length of Nikis Avenue, starting at the harbor from the west and continuing to the White Tower. This unique urban seaside setting dramatically turns at Aristotelous Square, where the elegant buildings have beautiful colonnades and arcades, continuing all the way up Aristotelous Street which ends in Egnatia Street—a road originally paved by the Romans in the second century BC! 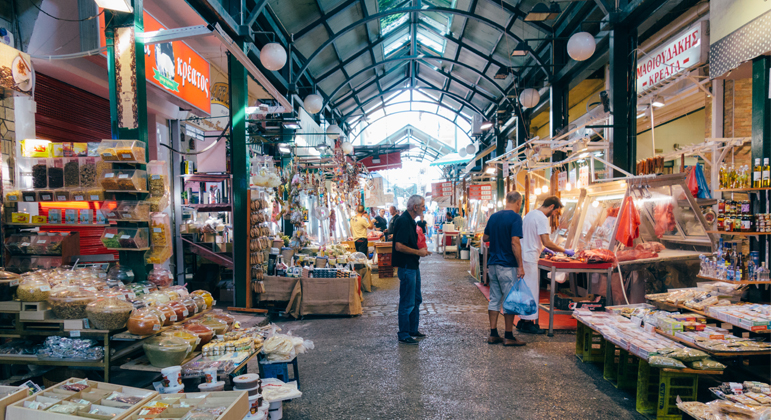 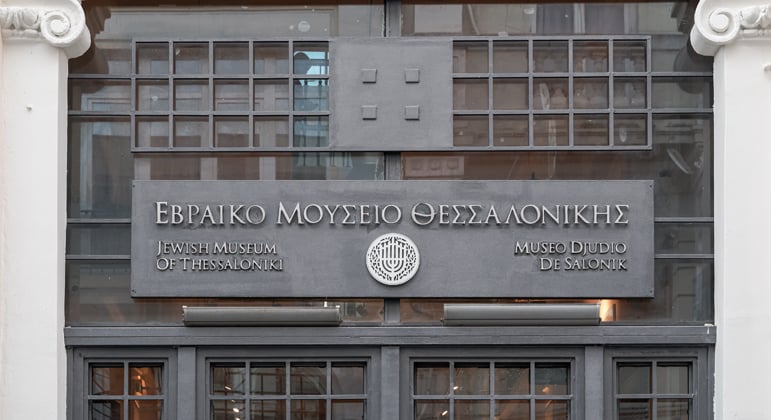 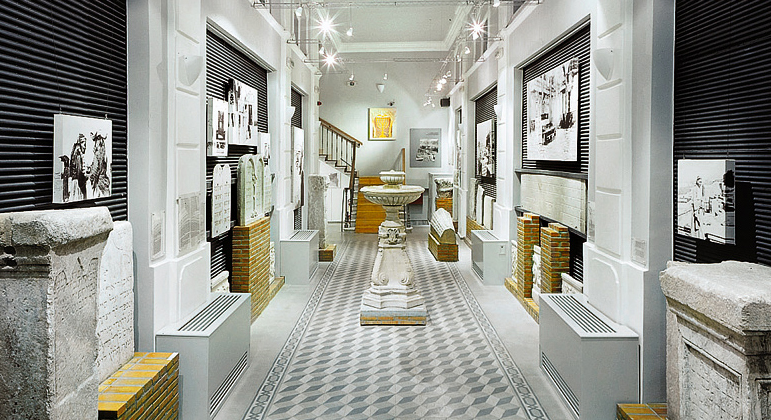 The first Jews came to Thessaloniki in around 140 B.C. from Alexandria in Egypt. The arrival of almost 20,000 Jewish newcomers deported from Spain, though, was what altered the face of the city. With their skills and abilities, the ‘Sephardites’ revived a Thessaloniki that had been wounded after its conquest by the Ottoman Turks, and these new arrivals contributed to its striking commercial ascent. In certain periods in time, the Jewish population was one of the highest in the city, especially after 1492. In 1870, the 50,000 Jewish residents made up 56 percent of the Thessalonian population and by 1941 there were 36 synagogues. The city’s oldest synagogue burned in the terrible 1917 fire and the Nazis destroyed all the others save one, the Monastirioton Synagogue, which was built in 1927 and has been gracefully restored. It’s easier to explore the old Jewish Market building, more familiarly called the Modiano Market—built-in 1922, the glass-roofed rectangular building is still in use today.

If you have time to visit the fascinating Jewish Museum of Thessaloniki, housed in a lovely 1904 building, you’ll learn how the Nazis destroyed all 300,000 tombstones in Thessaloniki’s Jewish cemetery, which has been the largest Jewish cemetery in the entire Mediterranean. At central Platia Eleftherias or Liberty Square, the solemnity of this chapter of the city’s past is keenly felt. This is where on July 11, 1942, the Germans rounded up 9,000 of the city’s Jews. The tragedy didn’t stop there. In 1943, virtually the entire Jewish population of Thessaloniki, numbering 46,091, was hauled off to Auschwitz. Only 1,950 Jews would return to the city of whose fabric their community had been a vital part for more than 21 centuries. 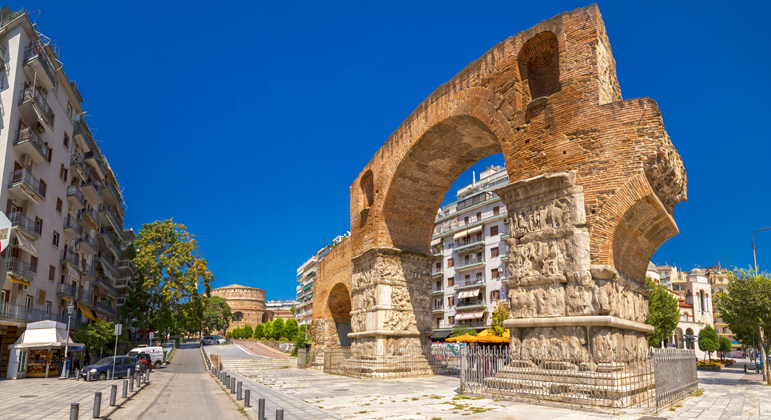 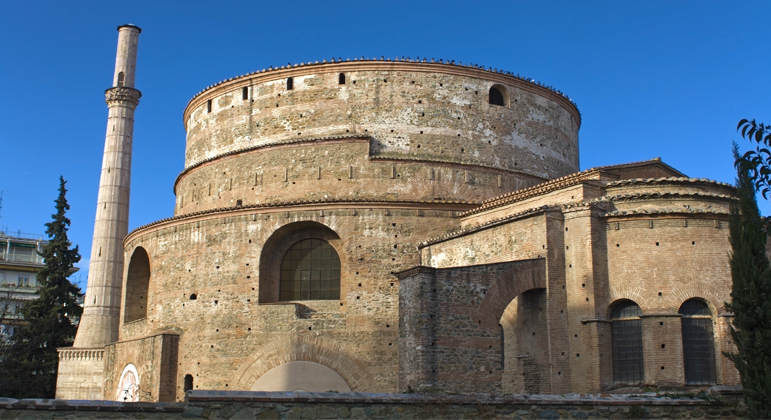 As you stroll around Thessaloniki the centuries and echoes of the past seem to slip by each other in a way that makes even a short time here something to remember. You may be surprised not only by the city’s many stories but also by the very visible ruins. There is no shortage of amazing Roman ruins, for example, the extensive ancient Roman Forum, but the most remarkable is the fourth-century Palace of Galerius which is like an open-air archaeological museum in the heart of the city. These impressive ruins include the throne hall known as the Octagon and the monumental Galerius Arch, built between 295 AD and 305AD following the victory over the Persians. A pedestrian way links the arch to the Rotunda, which Emperor Galerius built in 306 AD, possibly as a temple to Zeus. In the fifth century, it was converted into a church; the outstanding preserved mosaics date from that time. In the Byzantine era, Thessaloniki was rivaled only by Constantinople (present-day Istanbul). And don’t miss the evocative Hamza Bey Mosque, built-in 1467 and the only mosque in Greece that features a peristyle, or colonnaded yard. All this contributes to a vitality that simply grabs hold of you. 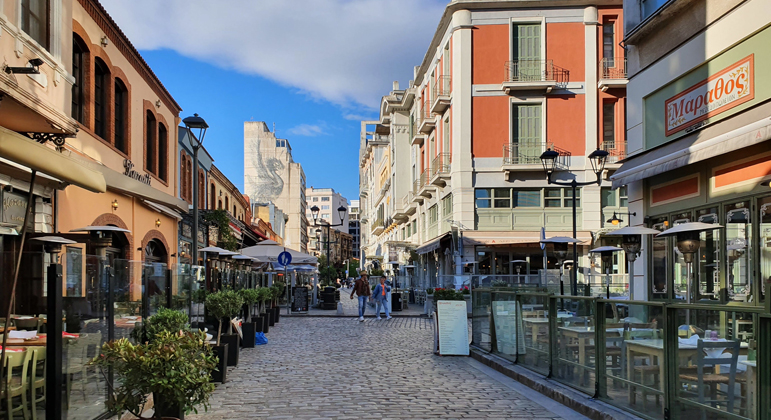 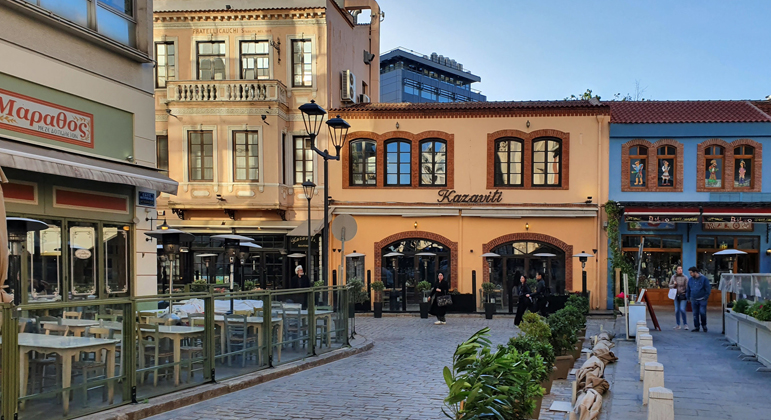 And more! Stroll down busy Tsimiski to reach the historic quarter of Ladadika, which survived the 1917 inferno that ruined so much of old Thessaloniki. Before that it was known mainly as an area of spice and grain shops usually having two stories, and after the fire many were used as olive oil storage rooms. Ladadika was restored in the 1990s and now the area is one of Thessaloniki’s liveliest: the strains of live Greek bouzogbi music emanate from one restaurant and café after another. Pastel colors and eastern fragrances enfold you in a resolutely urban yet surprisingly relaxed cocoon, and you’ll doubtless want to stay a while to soak up more of the special and youthful atmosphere found in these charming little streets. 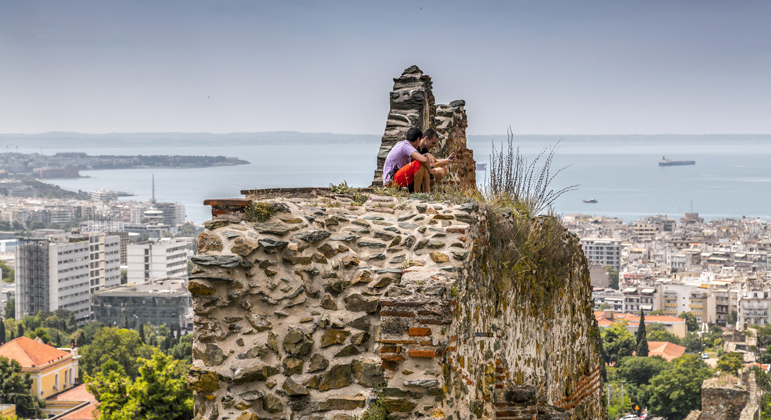 Other sightseeing stops in town include the world-class Thessaloniki Archaeological Museum, where you can see “the entire history of ancient Macedonia in one museum” and unique masterpieces of ancient Greek art. Ano Poli or Old Town is definitely worth a visit too. This neighborhood, tucked between the city walls to the north and east and Olympiados Street to the south, was not touched by the 1917 fire that burned down so much of the city and so it is an architectural window on the past. There is a mix of houses having both Macedonian and Ottoman elements as well the residences of the Muslim converts who secretly remained Jewish, known as the Dönmeh—these houses have both neoclassical and eclectic styles. While it is not next to the sea, the Ottomans prized the area of Ano Poli on account of its strategic position and sweeping panoramas, which you too can enjoy from the vantage point of the 16th-century Trigoniou Tower where the whole city of Thessaloniki comes into view: an unforgettable vista!